A couple weeks ago I saw a lot of snow; more snow than I had seen in my entire life. That doesn’t say much since I grew up in Miami, but it was a big heap of snow. Around 50 to 70 inches total, according to the Washington Post. My car was completely covered and I was snowbound for almost 10 days. It was the perfect excuse to stay in my PJs, not shave, tweet about snowmageddon, snuggle in bed with a few good books, knock movies off my Netflix queue, and cook — I kept busy. 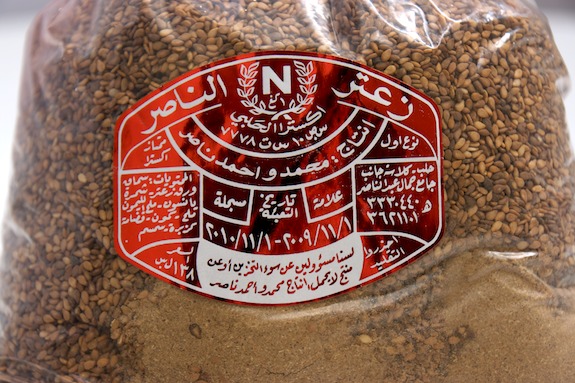 My pantry is usually well-stocked with boxes of pasta, cans of tomato, rice, chickpeas, Oreos and other essentials; probably enough food to last me an entire month, but I wasn’t in the mood for any of it. As much as I love Oreos dunked in cold milk, or an over-sized bowl of pasta, I was craving something different. I wanted something warm and billowy, chewy and filling. I was thinking bread. I had all the ingredients for dough and the obscenely large bag of za’atar that I had brought with me from Aleppo. With these, I was going to make manaqeesh.

If you’re Middle Eastern, you know exactly what I’m talking about. Manaqeesh (pronounced mana-eesh) is the Middle Eastern equivalent of pizza, usually eaten for breakfast, and probably one of my favorite foods of all time. This is what I grew up eating. I remember my mom used to tell my brothers and me that za’atar is food for the mind and good for your memory, so we happily ate. I’m not sure whether the za’atar lost its effects on me, but it was delicious: a combination of tangy flavors from the herbs and a warm nuttiness from the toasted sesame seeds. It’s something you have to try. While I was in Aleppo, my most memorable breakfasts included za’atar manaqeesh (مناقيش بالزعتر) or mamounieh (مأمونية), but I’ll probably talk more about the latter in a different post. 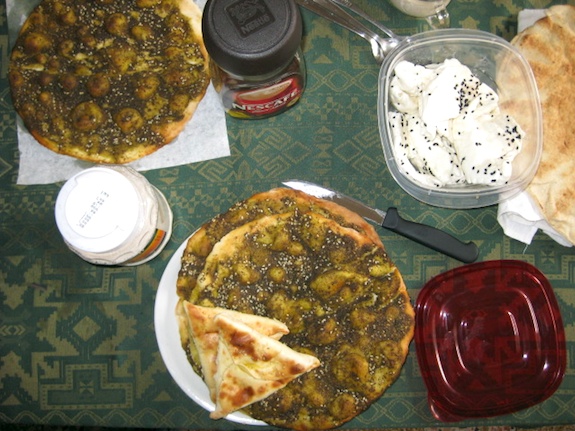 Bakeries in the Middle East offer different types of manaqeesh. Some have cheese, others have meat. My grandmother likes ones that are topped with a slightly spicy red pepper paste. Those are good, but my favorite are the traditional manaqeesh slathered with a mix of olive oil and za’atar. 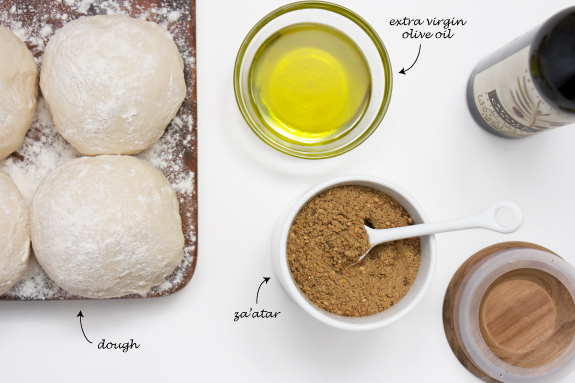 The preparation for this dish is exquisitely simple. The dough is the same as the one I used for the spinach fatayer I blogged about a couple months back. I’ve also gotten away with using pizza dough when I’m in a bind, but the results aren’t the same as the original manaqeesh dough that uses oil and milk. If you’re pressed for time you could do what my mom often did, which is mix za’atar with extra virgin olive oil and roll it up on pita bread as an afternoon snack or sometimes as a quick breakfast whenever my brothers and I took too long to get ready for school. 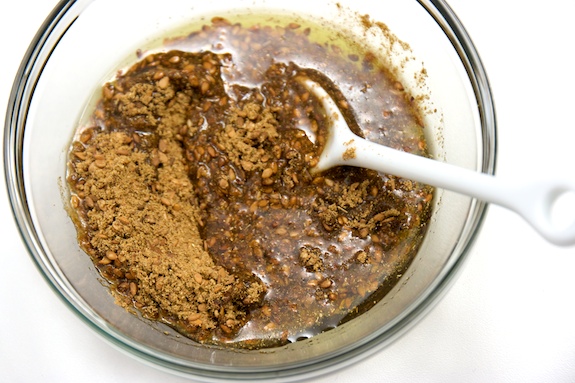 The word za’atar (زعتر) in Arabic literally refers to a variety of wild herbs in the same family as thyme, marjoram and oregano. What is commonly referred to as za’ater in the Levant is the spice mix made from this dried herb after it is combined with toasted sesame seeds, sumac, salt and other spices. 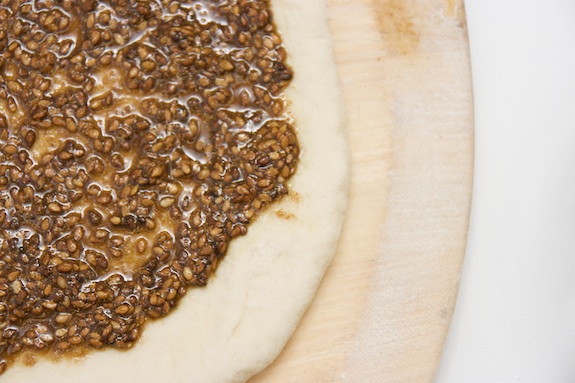 I never measure how much oil I add to the za’atar. You just need to make sure that it’s enough to make a smooth paste so that it doesn’t dry up in the oven. 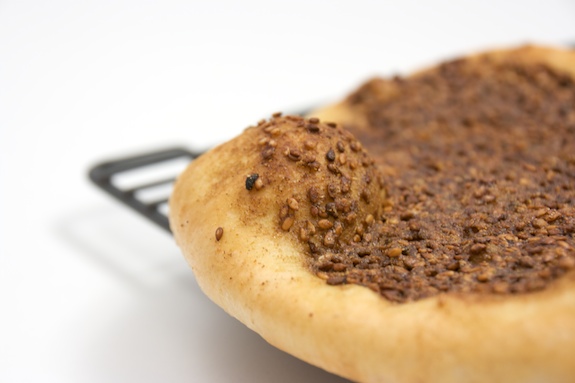 The trick to making the manaqeesh, like any pizza, is to add the dough to a scorching hot oven. If you have a pizza stone, that is ideal. Otherwise you can pre-heat an upside down baking sheet in a hot oven and add the manaqeesh to the reverse side. Once the dough cooks through, remove the manaqeesh from the oven and enjoy. saha w hana (صحة و هنا), bon appetit!

14 thoughts on “Food for the mind: Middle Eastern Za’atar Pizza”