If I had to pick one dish to become a vegetarian for, it would be fatayer (فطاير).

It’s a strong statement, and I’m not sure whether I would actually do it, but hypothetically, if I had to choose one dish to give up meat for, this would be the one. That’s all I’m saying.

My sito is an expert at making these, and I’m not just saying that because she’s my grandmother. She’s good — not only at making these pies, but at everything she cooks, really. There’s a saying in Arabic, يسلم يدك (yeslamou eedaik), that is used to thank a cook for preparing a delicious meal — it literally translates to, bless your hands. My grandmother’s hands have been blessed plenty of times. The truth is, she’s happiest when she’s cooking, and it shows in the food she prepares. It runs in her veins, and even mine, she tells me.

Fatayer is a simple dish, in theory: just dough and filling. The dough can be made with either milk or water. My grandmother tells me she makes hers with water, but that she’ll sometimes use milk (or powdered milk), depending on what she has on hand. Somehow she manages to make both versions taste equally amazing. I am convinced her hands are blessed! Luckily, we live in the age of twitter and blogs and facebook,  so I knew this would be a perfect question to tweet Anissa Helou. Chef Helou is a Mediterranean food scholar and instructor based in London, who also keeps a Mediterranean food blog. To her knowledge some cooks use milk in Syria, but no one does in Lebanon. My grandmother is Syrian, so this made sense to me. 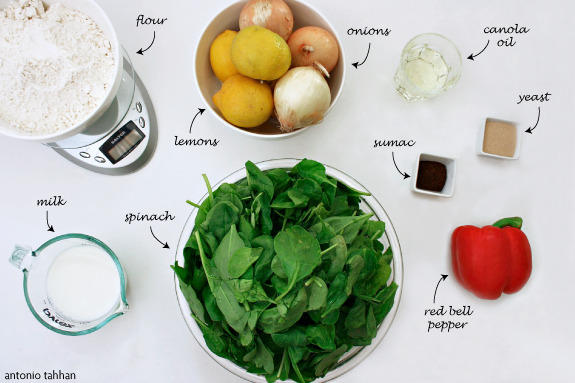 I have a feeling there will be some tension around the red bell pepper. While the red bell pepper is not traditional, I don’t think, it works on many levels – photogenically and culinarily. The specs of red in the filling add contrast to the shades of dark green spinach, while adding a subtle sweet undertone to the dish. It works. Try it, at least once, and let me know. 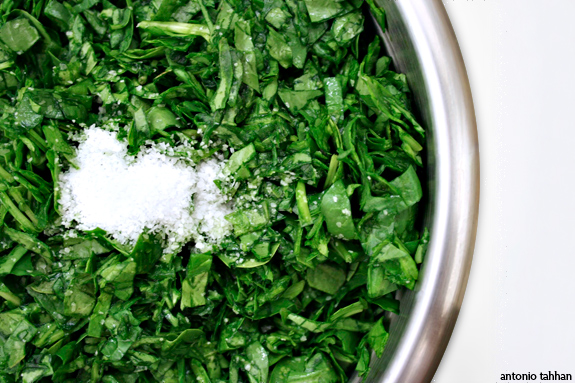 The filling starts with freshly chopped spinach. I used baby spinach, but that wilts down to almost nothing. In the end, any spinach will work. After you roughly chop the leaves, add salt to release the water from the spinach and let sit for 5-10 minutes, while you prepare the dough. 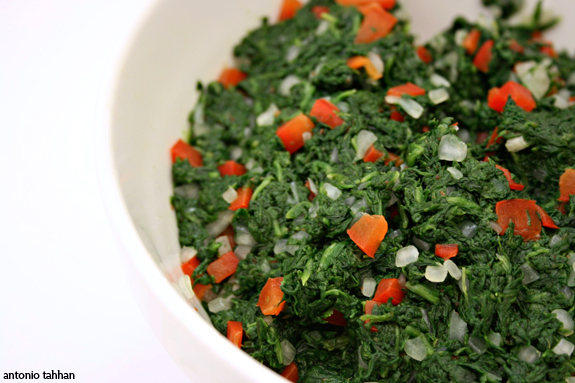 make sure the yeast is alive ‘n kicking 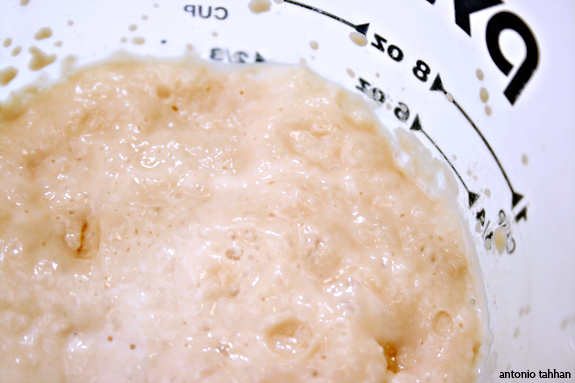 If you’re using dry, active yeast, you don’t necessarily need to make it bloom. I do this as a check to make sure that my yeast is alive and well. Simply add the yeast to warm water with a bit of sugar or honey, cover and let sit for 10-15 minutes. If it gets bubbly and foamy, it’s alive, if not, you just saved yourself a lot of frustration (and cussing). 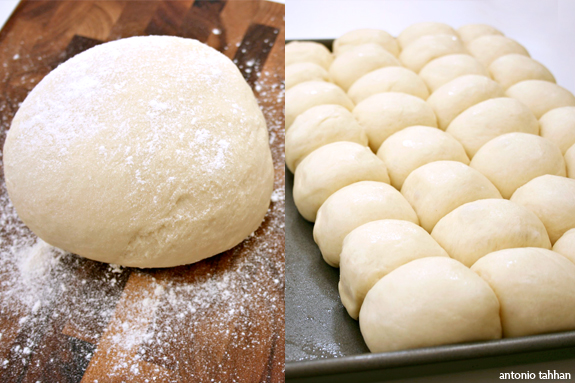 The smaller you make the dough, the prettier the fatayer will be, but the more patience you’ll need. In the Middle East, these involved dishes are almost never prepared alone. The women of the family usually gather to help the host and also take that time to catch up with each other and talk about stuff I wasn’t allowed to listen to as a child.

these are worth every step 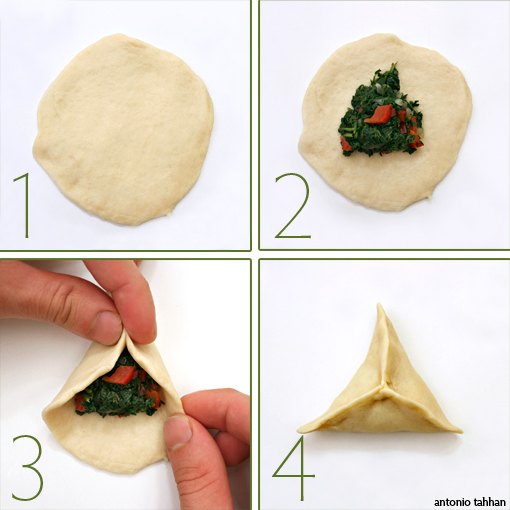 Just imagine how much quicker this would be if you had four or five pairs of hands helping you.

you’ll be happier once they bake, I promise 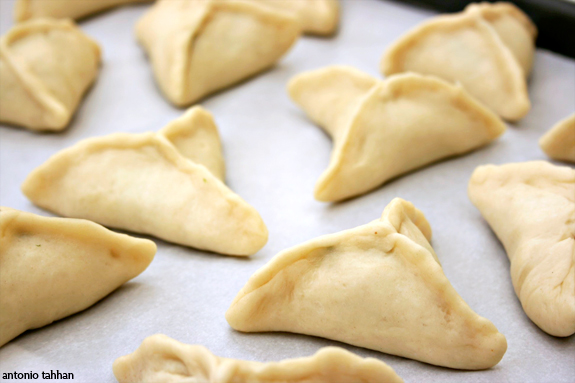 Once they’re all formed, make sure the seams are well-sealed before they go into the oven. I like to brush the surface of mine with a little milk, or a light egg wash, just to give the crust a nice sheen after they come out of the oven. 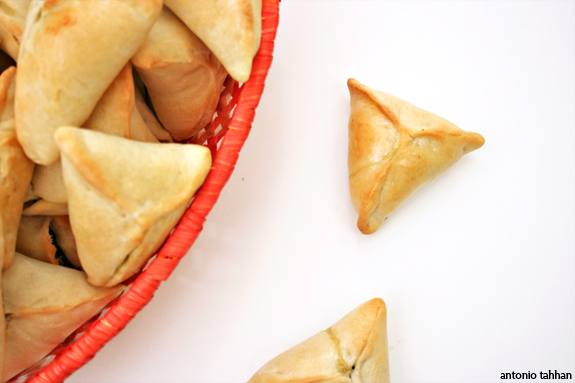 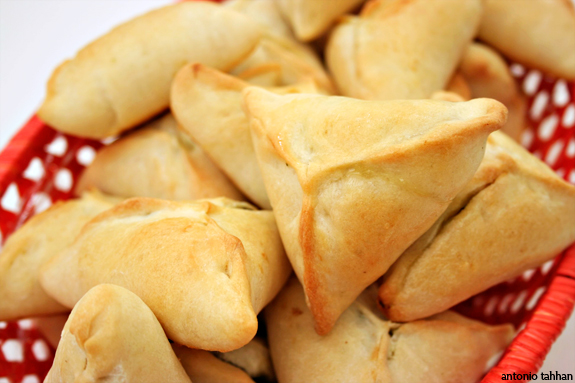 These pies are surprisingly better the next day, at least in my opinion. You can heat them up for 7-10 seconds in the microwave, or eat them at room temperature, which is what I will usually do. 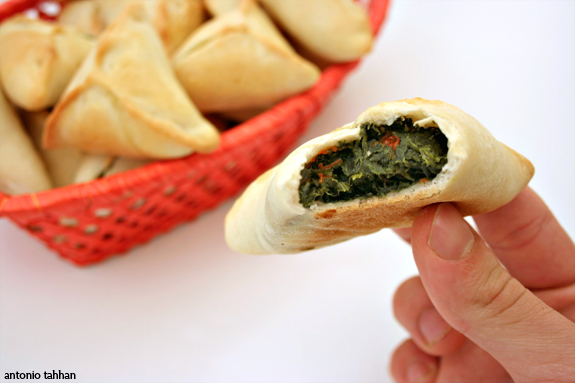 52 thoughts on “Bless your hands”