The situation in Syria has gone from bad, it skipped worse, and plunged straight into bleak. I needed time to wrap my head around the events of the last seventeen months.

Syria has been on my mind since the day I evacuated, April 26, 2011. My friends Bassel, Zaki, and Karam drove me to a bus station in the outskirts of Aleppo where I boarded an almost empty bus to Lebanon at 2AM. I never imagined things would get this bad. I read newspaper articles, blogs, Facebook posts; I watch videos on YouTube, listen to news reports; I follow vetted Twitter users who are inside Syria; I call friends and relatives on a weekly basis — and still, it is difficult to know exactly what is happening inside the country. My heart aches for all the Syrians who have lost their lives and livelihood during this bloody conflict. And my thoughts and prayers go to all those who remain trapped inside.

I’ve always thought about my blog as an extension of my home, a place where I host. It’s a digital space where I invite readers to pull up a chair. I share stories, photos, and recipes and start conversations around food and culture. People from around the world can chime in with a comment. I want to open my door once more and invite you to my digital dinner table.

Tea with friends by the historic citdael in Aleppo 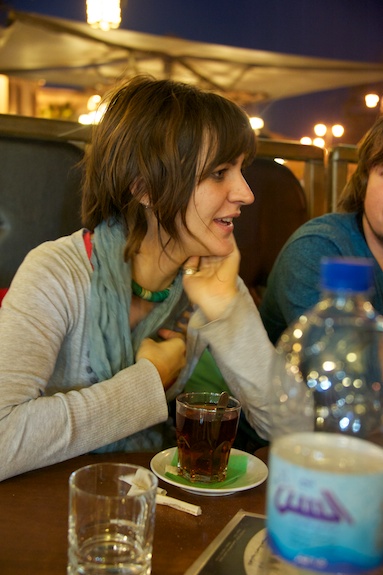 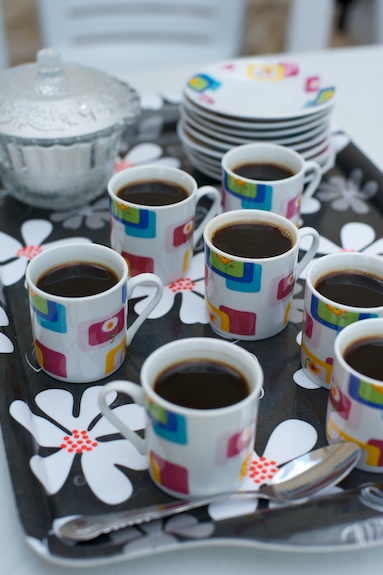 Part of the inspiration for today’s blog post came from the book, Day of Honey: A Memoir of Food, Love and War by Annia Ciezadlo. The book was published February 1, 2011, while I was still in Syria, but it wasn’t until I arrived to Lebanon that I was able to find a copy at a book store in Beirut. If you haven’t read it already, add it to your summer reading list. Annia writes about the conflicts in Lebanon and the war in Iraq through intimate stories of people living their lives in a war-torn region. She puts faces to part of the world that can often seem distant and disconnected. Annia writes, “if you want to understand war, you have to understand everyday life first.” I agree.

Lunch in the darkness 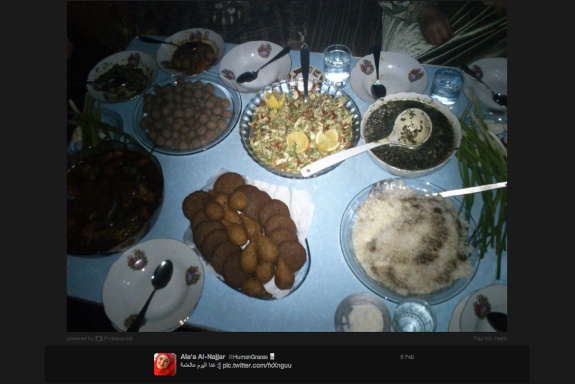 This is a photo from a friend on Twitter, @HumanGraces. She lives in Aleppo and tweets (mostly in Arabic) about everything from politics to food and family, including random musings from her brothers. On February 5, 2012 she tweeted this image with the caption, غدا اليوم عالعتمة, meaning, today, lunch in the dark.

Electricity in Aleppo (at that time) used to get cut eight hours each day; usually four hours in the early afternoon and four hours in the evening. When @HumanGraces tweeted this image my mouth watered, but I also felt a strange sense of nostalgia. There was kibbeh (a classic Levantine meat and bulgur patty), molokhia served alongside rice, and a big bowl of house salad that completes every meal in Syria. That’s when I noticed something else that was interesting, hidden in the shadows of the frame. Those were legs and hands of people sitting together around a dinner table. In the middle of a war. I sent @HumanGraces a Direct Message (DM) on Twitter to ask what the meal was like. Was it quiet? Did politics dominate the conversation? Any resentment or anger? @HumanGraces described the emotions surrounding the meal as a blend of helplessness and joy. They laughed and, she confessed, one of her aunts even ululated. If you only follow the politics and conflicts of the Middle East, or any region, you can easily glance over moments like this; the story of a family that gathers for lunch, clinging to any sense of normalcy in a world that seems to be falling apart.

There is a popular saying across the Middle East that says, يوم عسل ويوم بصل (yom a’asal w yom basal), which means, “one day is like honey, another is like an onion.” This is the expression Annia used as part of the title to her memoir. It’s a saying that captures perfectly the blend of emotions: helplessness and joy; an optimism for a better tomorrow. An expression that swallows pain and allows life to continue. In conflicts like the one in Syria, a better tomorrow is usually the most any family can pray for. When I speak with friends and relatives in Aleppo, a lot of them will use the expression, “الله يستر” (Allah yestor) or “may God guard/protect us.” As the conflict in Syria progresses and the country continues to crumble, I understand how this is the best millions of innocent civilians trapped inside can hope for.

One of the dishes @HumanGraces had at the table is a classic leafy broth called molokhia (ملوخية). This dish originated in Ancient Egypt where it is said to have been a meal prepared for kings (or pharaohs?). The idea being that molokhia (ملوخية) evolved from the word molokhia (ملوكية) (with a k instead of kh), which shares the linguistic tri-literal root ma-la-ka (ملك) — the Arabic word for king. Whether or not this etymology is accurate, I can certainly see why a king would love this meal. According to this Wikipedia article on molokhia, “the leaves are rich in betacarotene, iron, calcium, Vitamin C and more than 32 vitamin and minerals and trace elements.” 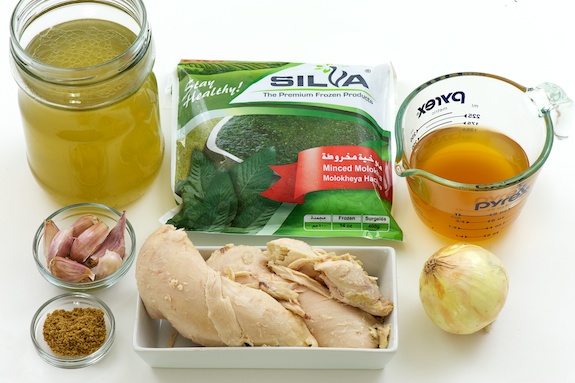 Molokhia leaves can give off a slimy texture, particularly when they’re used fresh or frozen. The molokhia I had in Syria was prepared at home from whole, dried molokhia leaves. The cook explained to me that her kids, who are around my age, would not eat it any other way. This was my first time eating molokhia and I loved it. There was barely any slimy texture to the leaves. In Egypt, however, traditional molokhia recipes call for the fresh leaves to be finely chopped, which tends to release more of the mucilaginous texture, resembling that of okra. 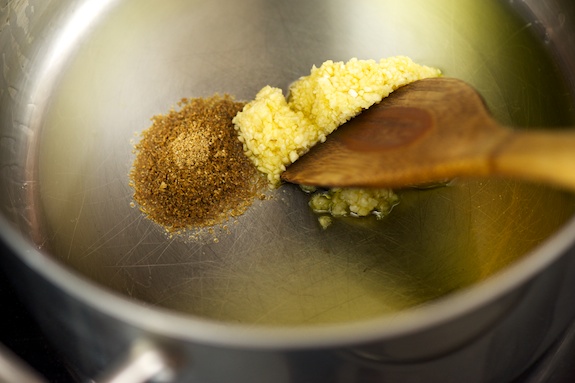 Once you are able to find molokhia leaves, the dish comes together fairly easily. Start off by heating up some ground coriander and garlic in a medium pot. This will remove some of the edge from the garlic and it will also bring out the essential oils in the ground coriander. You’ll know when it’s ready; the scent of coriander and garlic will perfume your kitchen. If your nose is stuffy that day, set your timer for 5 minutes, making sure to stir regularly so the garlic does not brown.

A splash of lemon 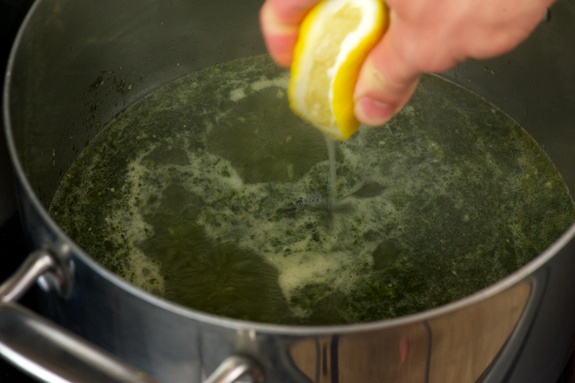 Once you add the broth and the molokhia leaves to the pot, bring the mixture to a boil and finish it off with a splash of lemon juice. This is supposed to help cut down on the slimy texture. 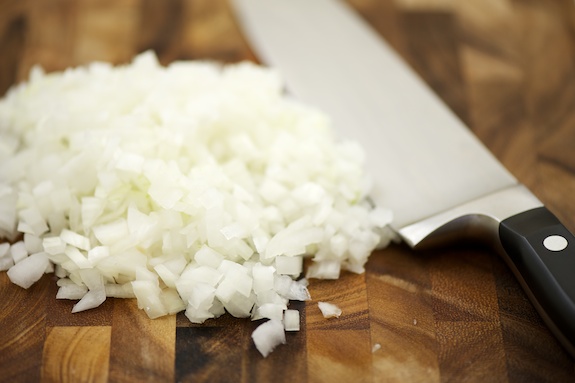 In the Levant, particularly in parts of Lebanon and Syria, it is traditional to serve molokhia with minced onions in vinegar — like a quick pickle. The acid notes in the vinegar, like the lemon juice, help bring out and balance the flavors of the dish. 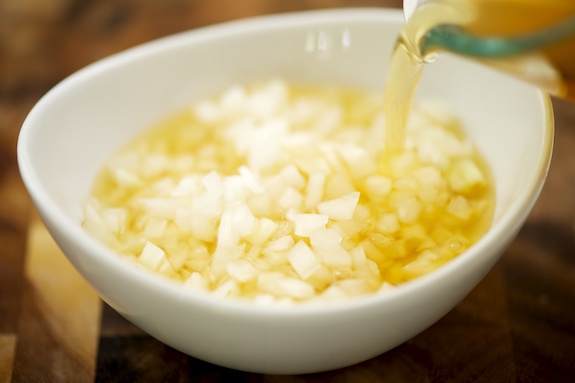 At this point you’re ready to eat. Serve the molokhia and rice in separate bowls alongside the pickled onions for guests to add as much as they would like. 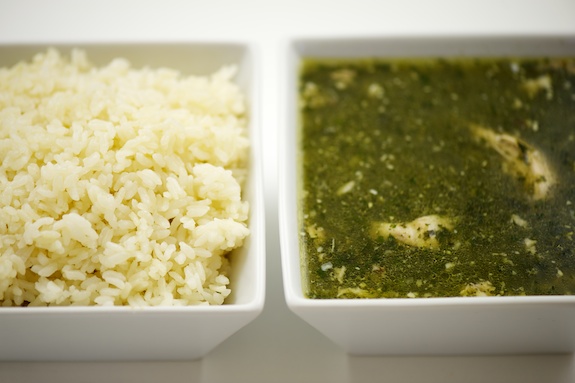 Note: If you are using fresh molokhia leaves, pluck the leaves from the stems first. Then rinse them in cold water. Strain, but do not worry if the leaves remain wet as they are going to be cooked in broth. 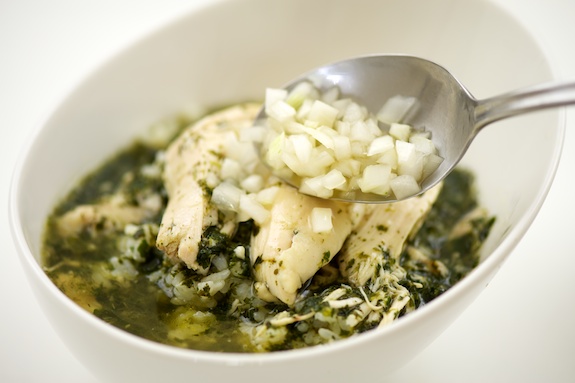 Thank you for everyone who wrote in with comments and emails asking about the situation in Syria. It has meant a lot. I continue to hope for a speedy resolution — الله يستر (Allah yestor).

14 thoughts on “Molokhia at the digital dinner table”