Middle Eastern spreads are plentiful, but very few have been able to jump the cultural divide into restaurants and homes in the States. In the Middle East, families, neighbors and even strangers gather around these homemade delicacies to talk for hours about absolutely anything.

Hummus is by far the most recognized Middle Eastern spread, but you don’t need to look far to find plenty of others that are just as tasty (or tastier!). Baba Ganoush is a traditional spread that uses charred eggplants to create a rich smoky pulp that is out-of-this-world delicious. For maximal fire-roasted goodness, roast the eggplants over an open flame. For those of us, however, who are only granted this luxury 2 weeks out of the year (if we’re lucky), we must turn to other alternatives. When it’s subzero outside I use my broiler or grill pan and find that both deliver a comprable fire-roasted flavor.

Baba ganoush literally translates into father who spoils (with an over-caring and positive connotation) in case you were wondering. This is a family recipe that was given to me by my grandmother who grew up in Aleppo, Syria (one of the greatest culinary centers of the Middle East). In this region of Syria pomegranates are abundant and bursting with flavor, so it isn’t surprising that a pomegranate version of this tasty spread evolved. Not only does the pomegranate add a more subtle citrus bite, but it also balances the bitterness of the seeds in the eggplant with its natural sweetness. 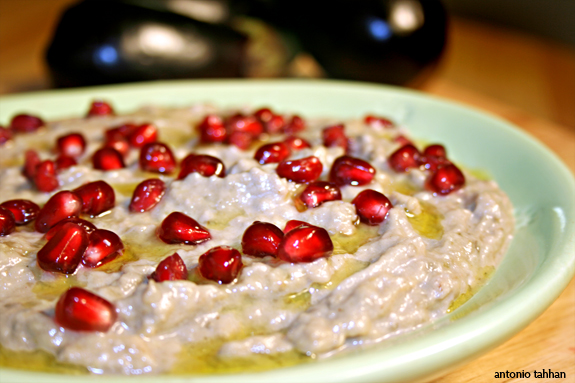 6 thoughts on “Delicious, Any Way You Roast It”