When the bomb cyclone hit the New England area a few days ago, I was prepared. The cyclone may have packed bitter cold wind chills and the ability to crush my soul like a popsicle, but I had soup. Specifically, Fadi’s red lentil soup. The bomb cyclone didn’t stand a chance. Before I get to the soup though, let me tell you about Fadi. 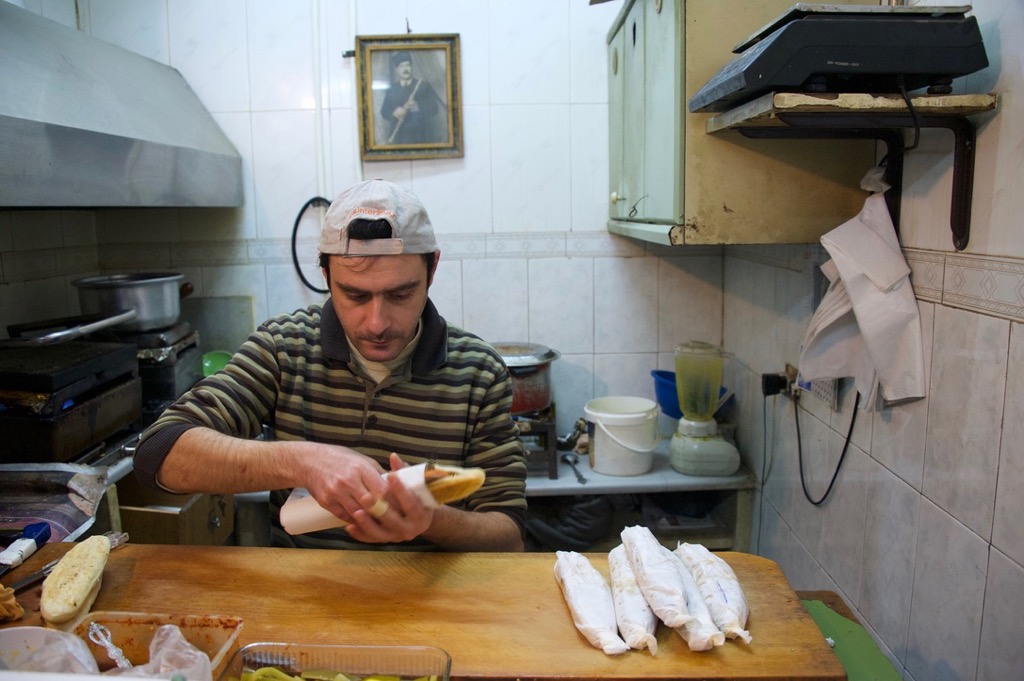 Fadi makes some of the best sujok sandwiches in all of Aleppo. Sujok, if you haven’t had it before, is an Armenian sausage flavored with lots of garlic and a variety of fragrant spices such as cumin, fenugreek, Aleppo pepper, and allspice. That’s what drew me to Fadi in the first place. His sujok is legendary. Once the temperature in Aleppo begins to dip, butcher shops throughout the city prepare their own sujok recipes and hang them out front to dry. You can’t miss the aroma of garlic and spices as you walk around the city. 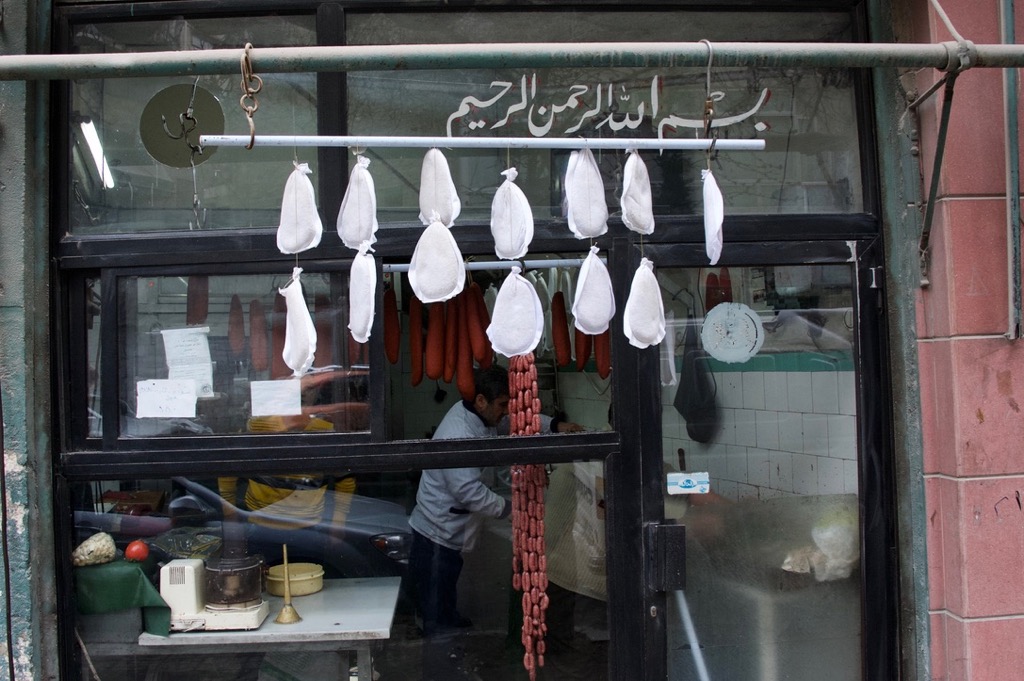 Fadi is second generation Syrian. His grandfather fled from Urfa, Turkey to Aleppo during the Armenian genocide. You can see a photo of Fadi’s grandfather hanging above Fadi in the first image. Fadi inherited his small sandwich shop, Abu Jack’s Sandwiches, from his grandfather. When you walk into Fadi’s shop, you’ll be greeted by the scent of sujok sizzling on a sandwich press and the sound of a soccer match playing loudly on the tv hanging above your head. The shop is pretty small — it can barely fit four adults standing in front of Fadi’s counter. This usually means there’s a line out the door. 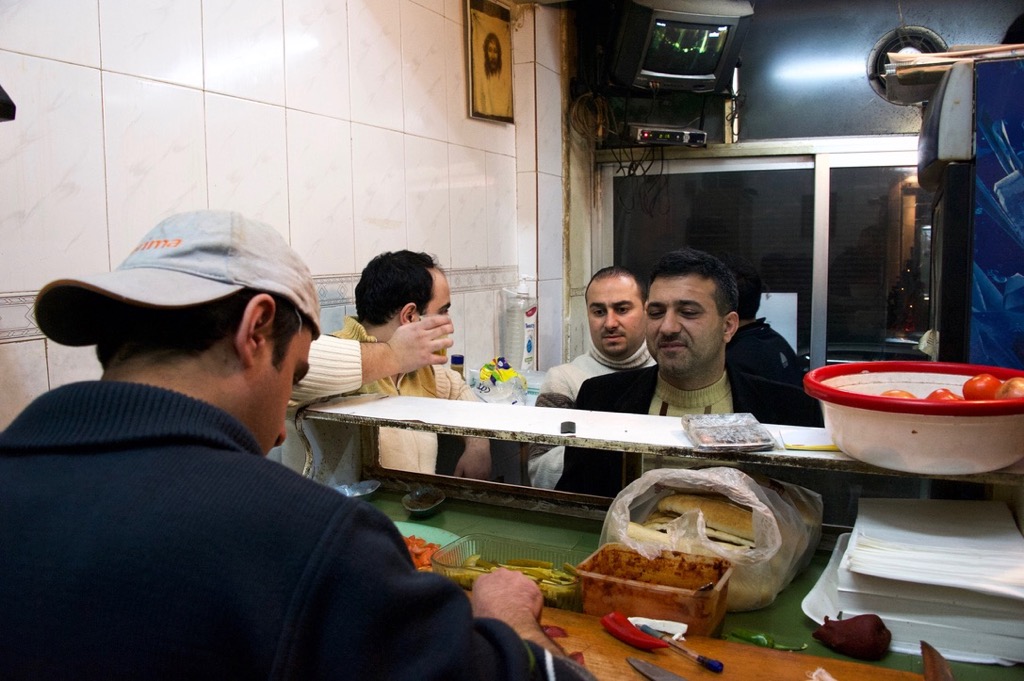 That’s where Fadi’s red lentil soup comes in. In order to keep his customers warm and happy, Fadi retrofitted a coffee dispenser for his simple yet delicious red lentil soup. It’s easy for soup to be overshadowed by sujok, but Fadi’s soup is incredible. It merits its own blog post. Before winter is over (or if you find yourself in another bomb cyclone), you need this soup in your arsenal. The good news is that the soup is incredibly simple to prepare. 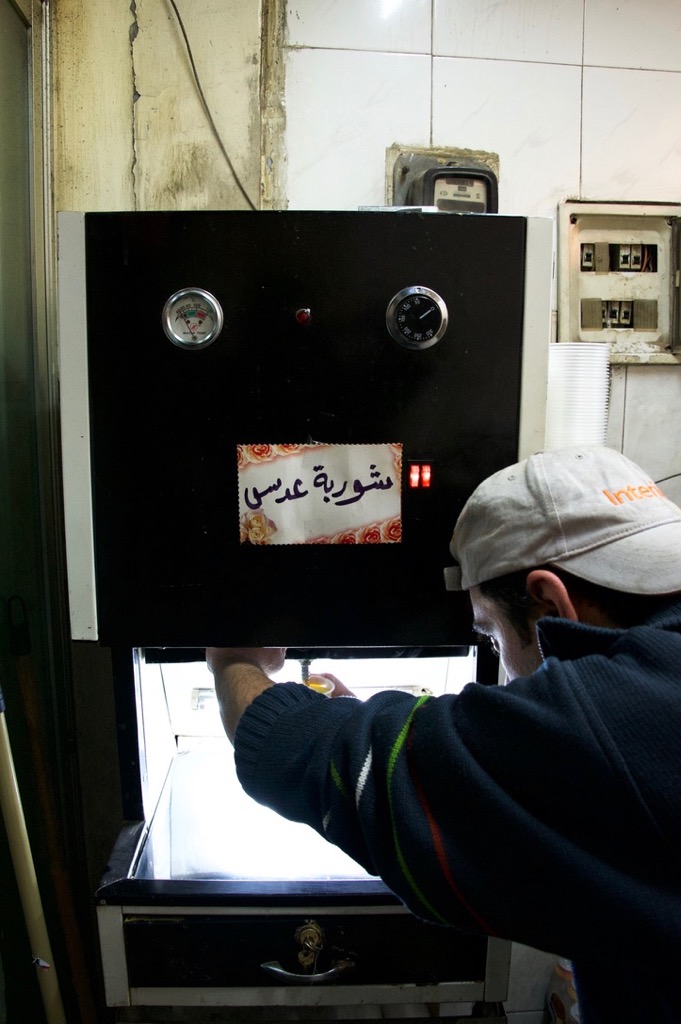 The ingredients are simple. Fadi uses a mix of rice and potato to thicken his soup. And the soup is very forgiving, so don’t worry about precise measurements. 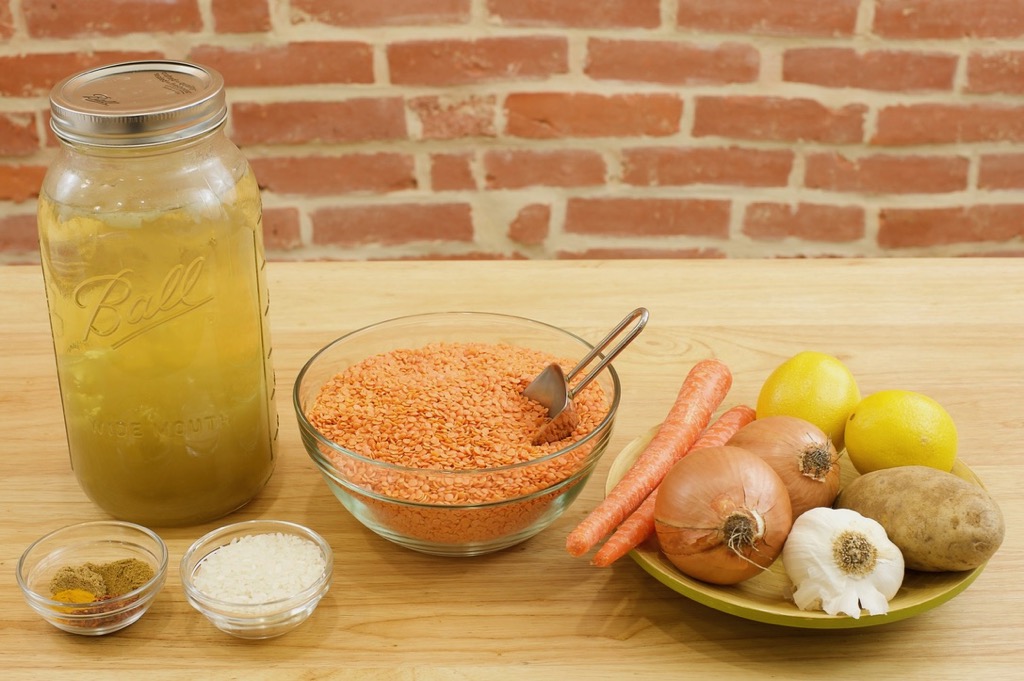 You also don’t need to worry about perfect dicing. Since the soup is pureed at the end, a rough chop does the trick. 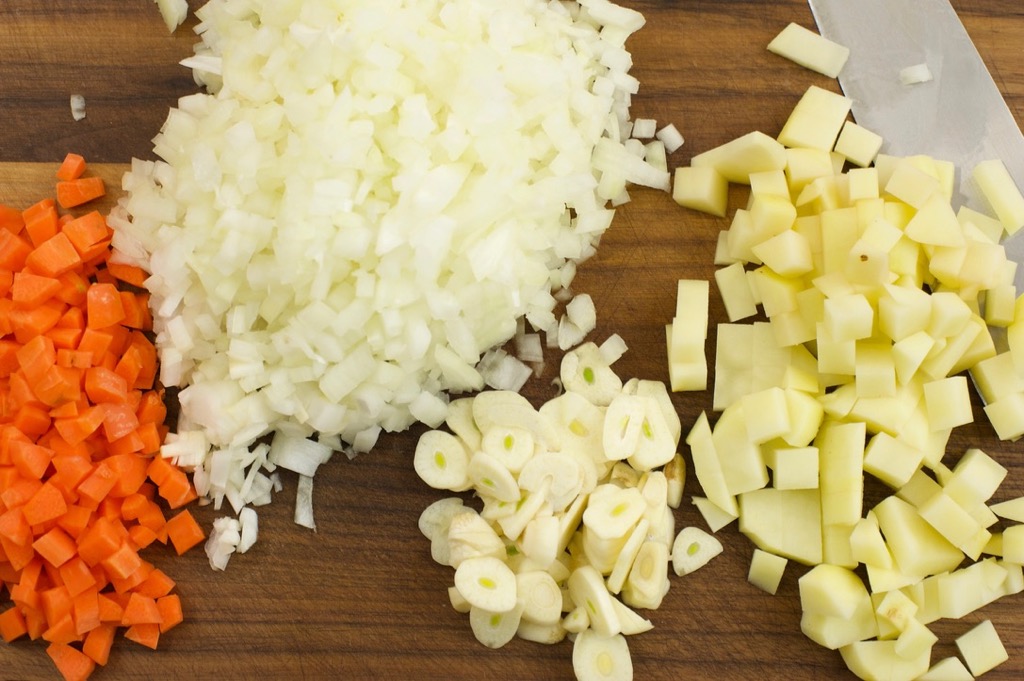 I start by sweating the onions and garlic in a little bit of olive oil. I season with salt and pepper. The key to any good soup is to season in layers. It’s better to season gradually as you go along rather than try to season the dish at the very end. It doesn’t taste the same and you end up using more salt if you season at the last minute. 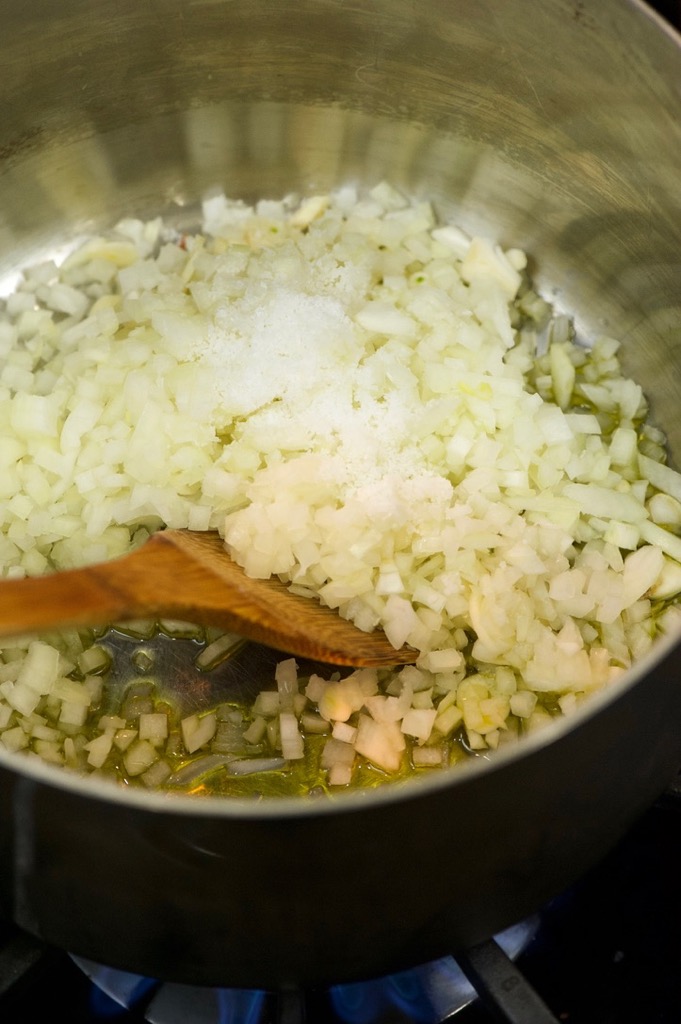 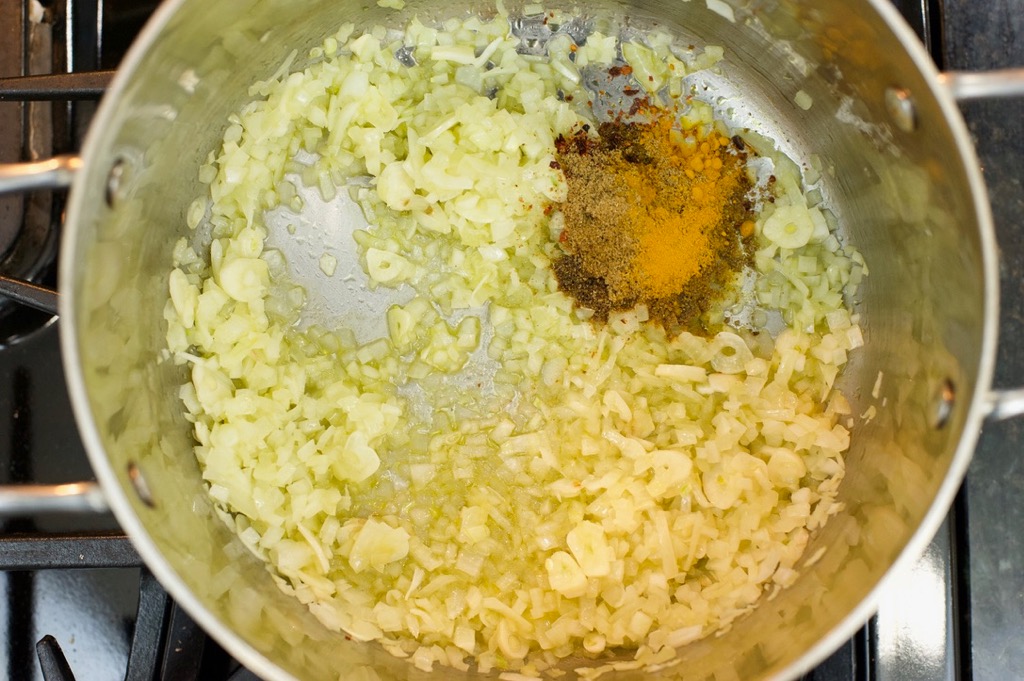 I like to cook the spices for a couple of minutes, which helps draw out their flavors. Once you begin to smell the spices, add the rest of your ingredients.

everything else: lentils, rice, carrots, potatoes, and broth 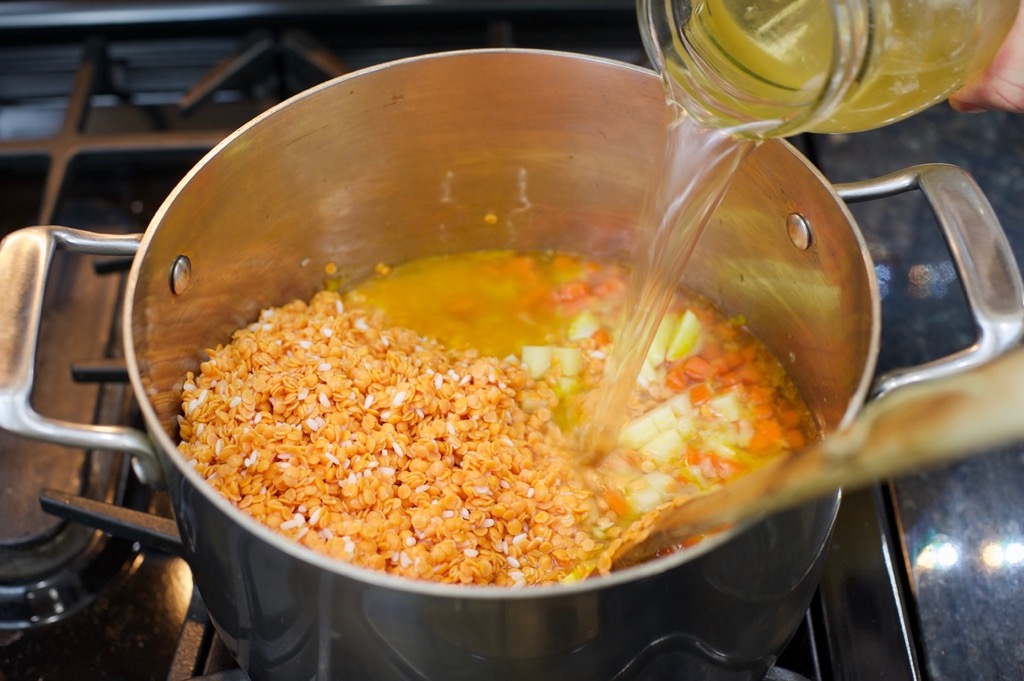 Bring the broth to a boil and then lower the heat to a simmer. Cover the pot partially with the lid and simmer for 30-45 minutes or until lentils, rice, and potatoes are fully cooked. 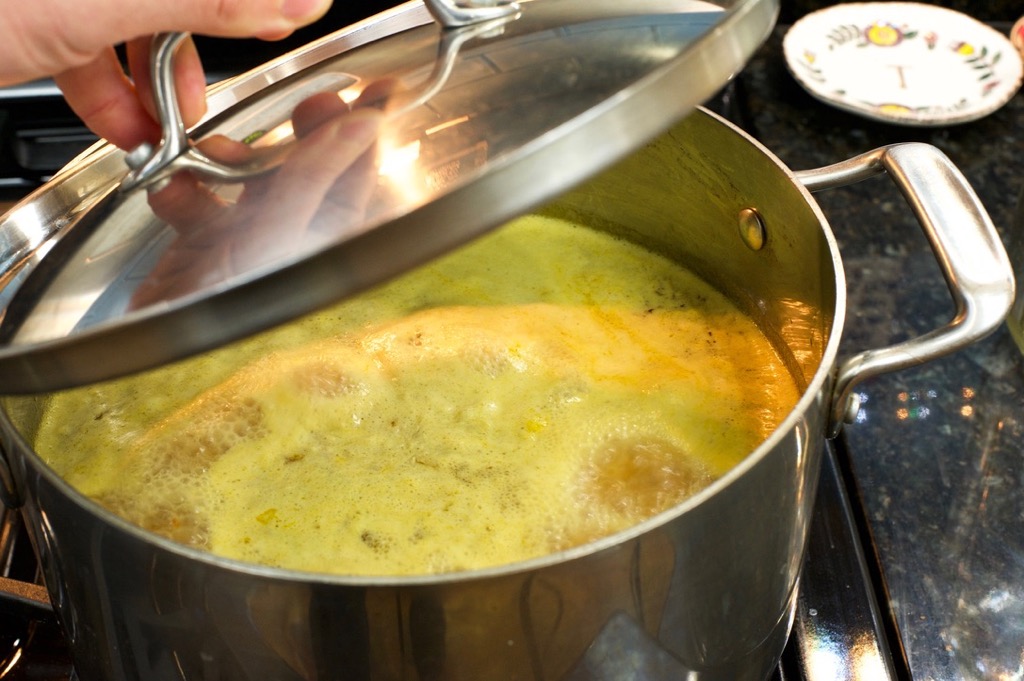 At this point, you can serve the soup as is, but I like to puree the soup for a rich and creamy texture. If you decide to puree the soup in a blender, make sure to leave the lid partially open to allow the steam to vent. Otherwise, you’ll end up with soup on your ceiling! This is the perfect job for a hand blender, if you have one. 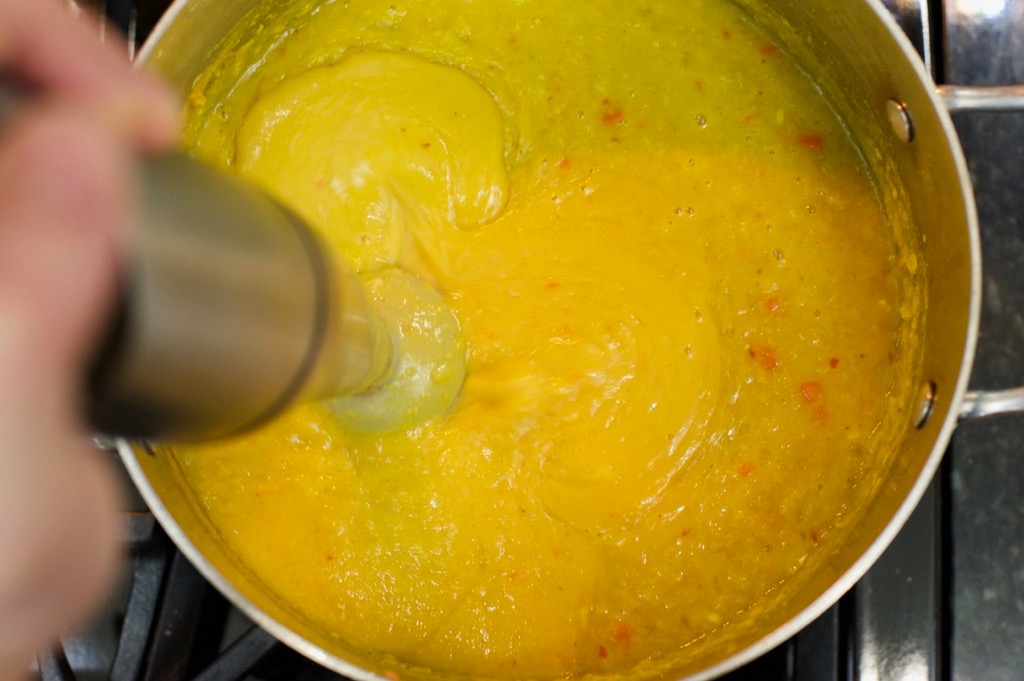 I like to serve the soup with an extra sprinkle of Aleppo pepper, cumin, and a drizzle of extra virgin olive oil. 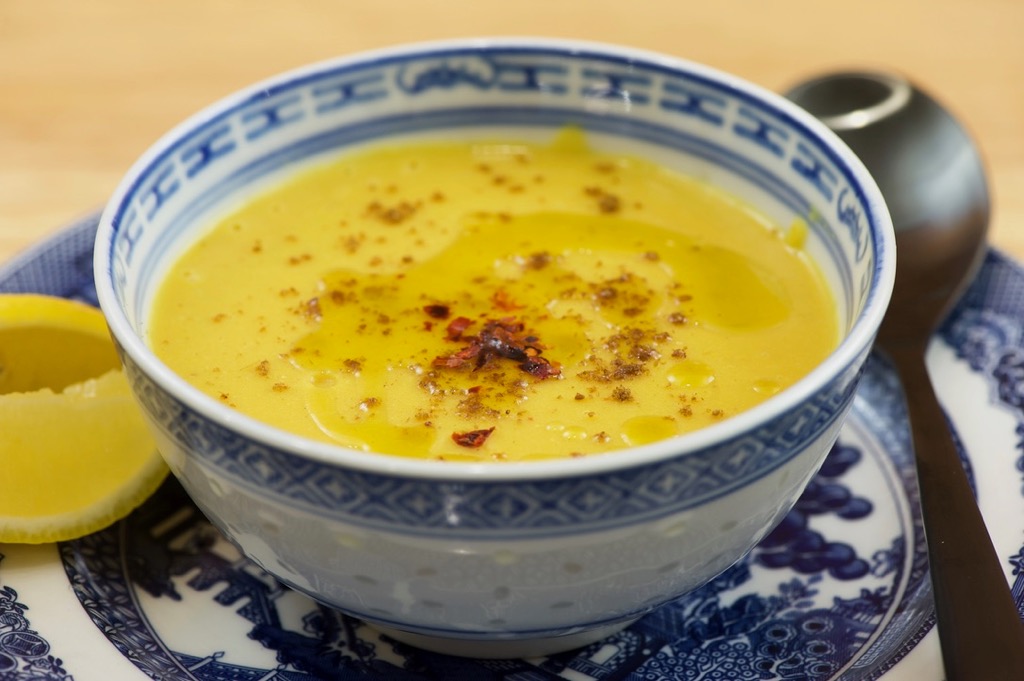 The best part about this soup is that spritz of fresh lemon juice at the end. It brightens up the entire dish! 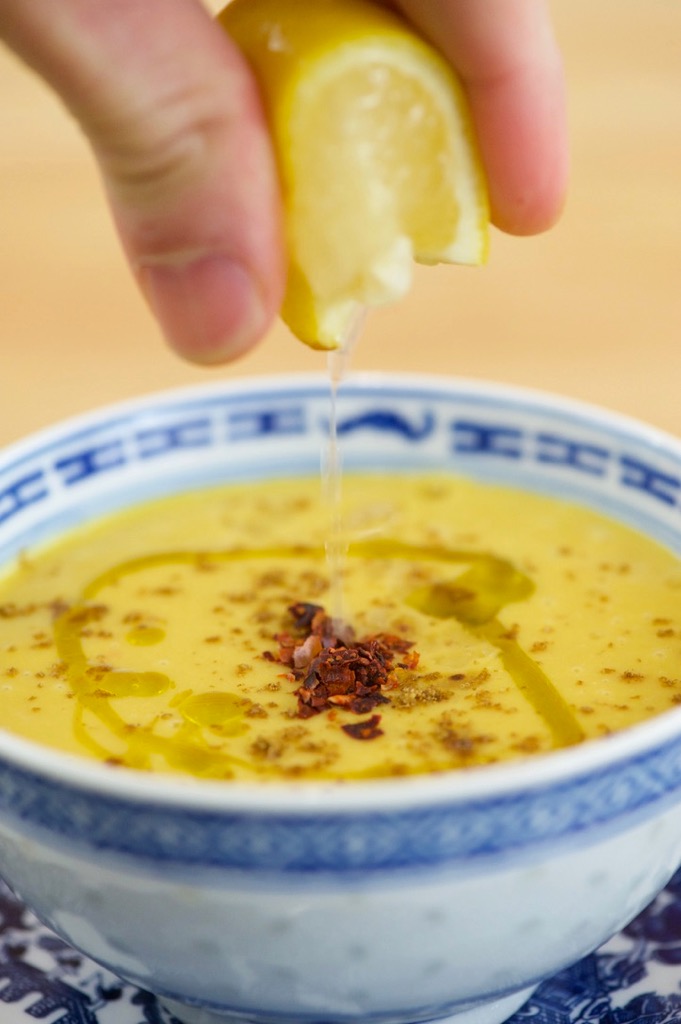 Notes: If you’re using a regular blender to puree the soup, be sure to vent the lid of the blender to allow the steam to escape. The soup can be made the day before and heated before serving. In fact, it tastes better the next day! 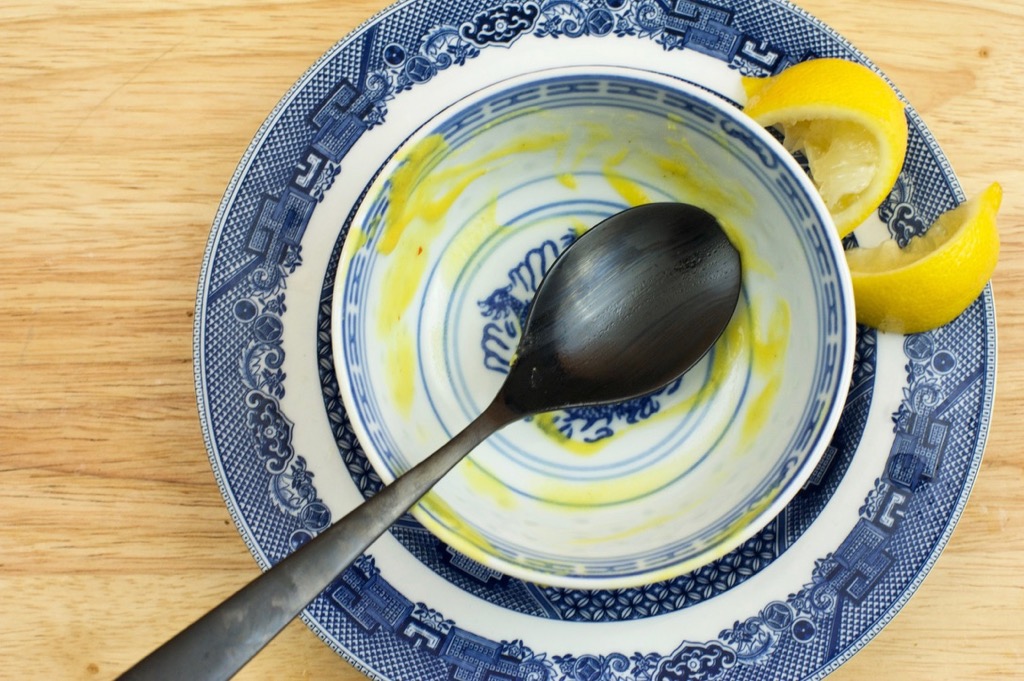