I’ve had an incredible start to my Fulbright in Syria. It’s been almost two weeks since I arrived — a perfect time for a quick update.

My flight landed in Aleppo on Saturday night, around midnight. After 28 hours of traveling, door to door, I arrived at my grandmother’s sister’s house in Aleppo. Like a true Halabiye (Aleppan) she had a delicious spread of mezze laid out as soon as I walked through the door: muhammara (محمّرة), olives, pickles, homemade mortadella, hummus (حمص), labne (لبنة), zeit w za’atar (زيت و زعتر); I slept like a baby that night. 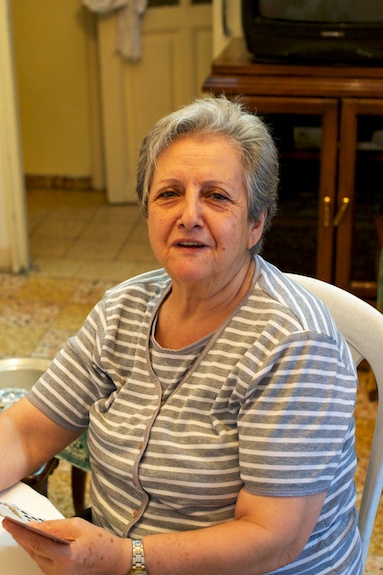 I spent my first few days doing administrative things: I got a cell phone, registered at the University of Aleppo, exchanged currency. I took a bus down to Damascus to meet with the other Fulbrighters as well as the Fulbright committee here in Syria. We were all invited to dinner at a restaurant called Marmara where we got to meet the Syrian Fulbright students who are getting ready to study abroad in the US.

University of Aleppo, College of Literature and Humanities 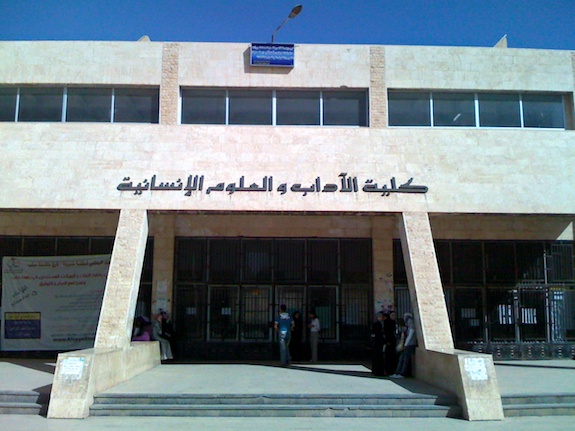 I think I’ve already gained five pounds since I’ve arrived. It’s hard not to. Every day I come across new recipes that I want to blog about. I walk as much as I could and take the stairs whenever possible. My grandmother’s sister, bless her heart, pulled me aside the other day and asked whether I had a phobia of riding the elevator. I told her I take the stairs so that I can eat more of her delicious food. I’m sure she will hold me up to this for the next nine months that I’m here.

why I walk and take the stairs 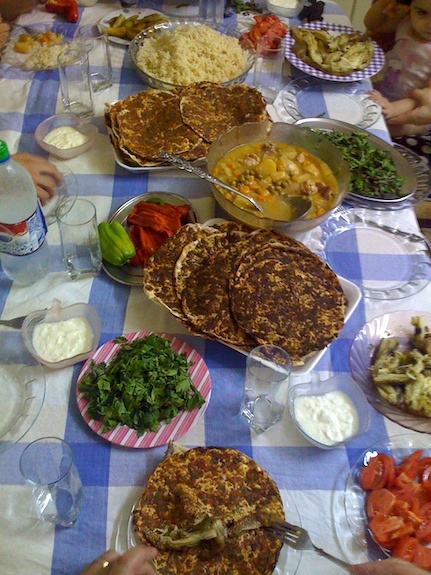 The picture above is from a lunch I recently had at a friend’s house. The star of the meal was the traditional meat pizzas called lahm bil ajin (لحمة بالعجي). I will have to dedicate a complete blog post to these thin flatbreads topped with a mix of ground lamb, fragrant spices, and a flavorful puree of fresh vegetables. They’re incredibly delicious and are an important part of Aleppo’s rich culinary heritage. Most families prepare their own meat mixture at home and send it to their neighborhood baker who will use their dough and large clay ovens to shape and bake the pies for them. My friend’s mom prepared her meat mixture in the morning and sent my friend and I later that afternoon to pick up the freshly baked flatbreads from the bakery. I posted a few photos from the bakery to my flickr.

Last Friday my grandmother’s sister prepared mujaddara for lunch. Mujaddara is a simple, but traditional Middle Eastern dish of rice and lentils. Some families make it with bulgur wheat, and in Egypt they add noodles to the rice and lentils, and serve it with a spicy tomato-based sauce. Egyptians call this dish Kosheri (كشري).

The same day I had mujaddara at my grandmother’s sister’s house, I visited two friends, and both their families had also made mujaddara for lunch. For Christian families who abstain from eating meat on Fridays, mujaddara is a quick and healthy vegetarian meal for the family.

I had photographed mujaddara before I left the States, but never got around to posting the photos on my blog. These photos are from then. 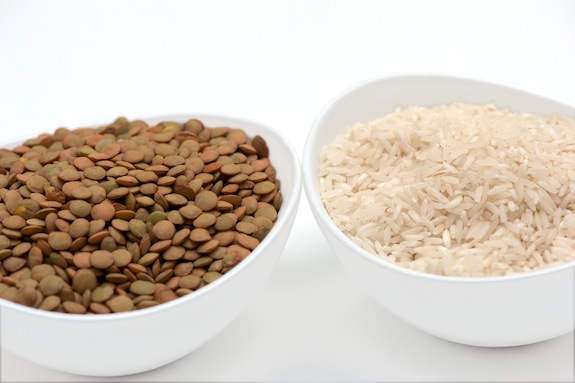 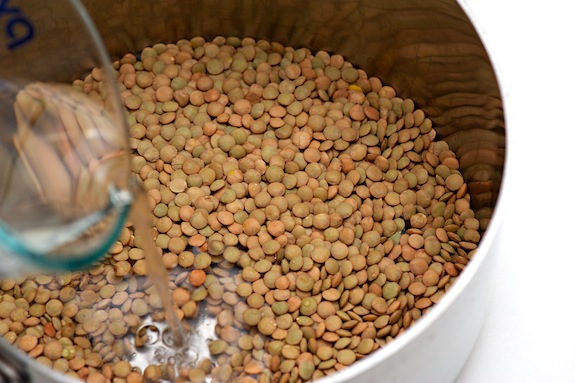 the more onions, the better 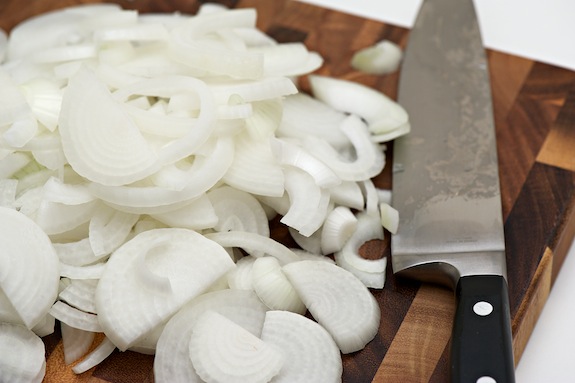 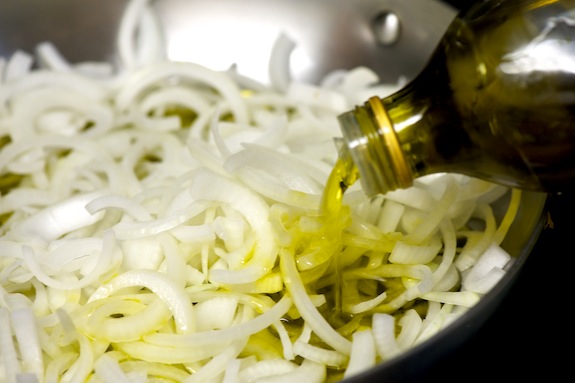 Usually people will not fry the onions in extra virgin olive oil because it has a low smoking point. I prefer the taste of olive oil, so I take extra time to cook the onions over low heat for a long time until they become crisp. If you’re in a rush you can use canola oil or any relatively flavorless oil that has a higher smoking point. 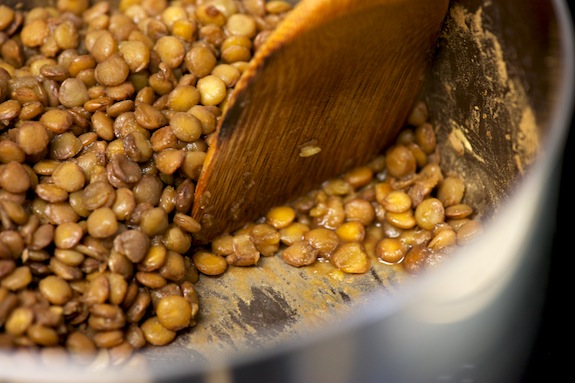 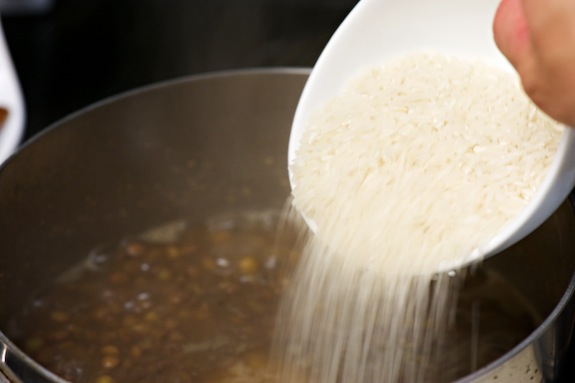 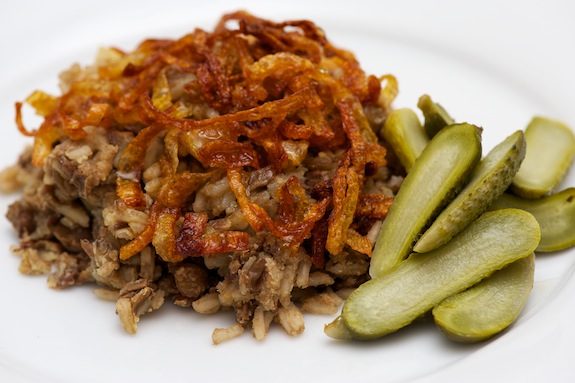 Note: Many recipes call for frying the onions in canola oil over high heat. While this approach yields a crispier texture, I prefer the sweetness from intensely caramelized onions.
Make sure to season the lentils with salt after they cook to prevent them from developing a grainy texture.

Disclaimer: The opinions I express in this blog are my own and do not reflect those of the Fulbright program.