A few days ago I promised you a Turkish post, but I’ve got something better. Ever since I wrote about Peter’s Greek Christmas Cookies I’ve been thinking, rather remembering, more about what this blog means to me. Blog existentialism, if you will; Olive Juice was born out of necessity. I needed a place to jot down and compile my recipes, experiences and, most importantly, the memories that would inextricably become a part of those experiences.

A mathematician by day, I realized that I can use a blog to pursue what genuinely inspired me: food, something that a lot of friends and family thought was a silly crush that would soon fade away. Seven years later, the passion is still here, and admittedly, stronger than ever. As I write this I’m eager to share with you more about the other aspects of food that make me giddy, but that will have to wait for another post. Today, as promised, is going to be about Turkey and the traditional pudding called Muhallebi that I chose for my inaugural Turkish entry.

The detail that makes this pudding better than simply ordinary, besides its ease and wonderful flavor, is its history. When I first read on Wikipedia that Muhallebi was Turkish, I became curious. Not because it was Turkish in particular, but because Muhallabi, rather محلبية (pronounced Mahlabiye), was a dessert I had always considered as Middle Eastern – a childhood favorite, in fact. It was the pudding I could never get enough of. The pudding that would make me (voluntarily) set the dinner table only to reach dessert mere minutes sooner. The pudding I knew I had to blog about. 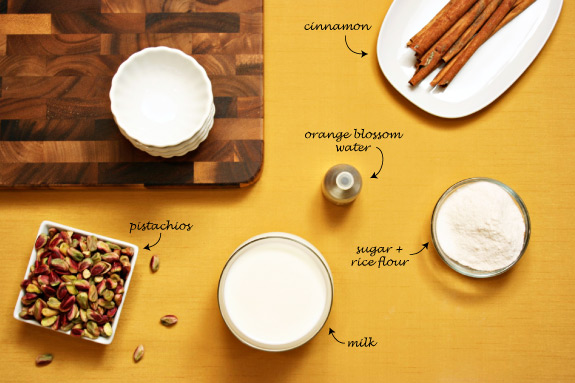 Upon reading that the pudding was originally Turkish, the skeptic in me also wanted further proof of the fact. A few Google searches later landed me on Warda’s blog, 64 sq ft kitchen, where she writes about Muhallebi as a staple Algerian/Moroccan pudding also reminiscent of her childhood. A pudding that her grandmother would quietly, but often predictably, put together in a matter of minutes. The ultimate indicator being the unmistakable fragrance of the orange blossom water that carried through from the kitchen. It was stories like these that made me fall in love with this pudding all over again.

The pudding is a trooper, a survivor of sorts. A simple milk-based dessert that dates back to the Ottoman Empire, which for hundreds of years grew to include most of the Mediterranean, including parts of North Africa and most of the Middle East. This explains a lot of the influences that carry over, with slight variances, across the more recent country boundaries. On that note, here’s what you’ll need to do to bring Muhallebi into your own kitchen:

In a small saucepan, whisk together milk, rice flour and sugar until dissolved. Stir with a wooden spoon over medium heat until it reaches a boil. Continue stirring over medium-low heat until you can coat the back of your spoon (when you can make a line with your finger without the liquid coming together, you’re set). I didn’t time it, but Warda says this takes about 15 minutes total. 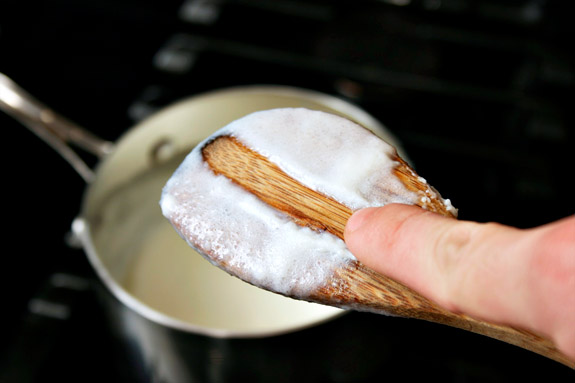 Once the spoon test clears, you’ll want to turn off the heat and add a few drops of the orange blossom water. Pour the thickened pudding into ramekins, cover with plastic wrap and refrigerate until you’re ready to serve. A light dusting of ground cinnamon and a sprinkling of chopped nuts is traditional. I used pistachios, but almonds are also popular (I’ve even seen both used together). 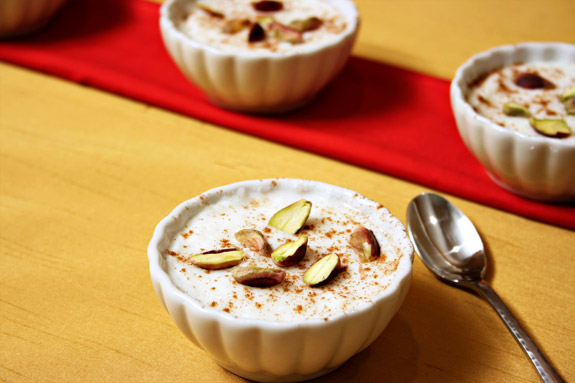 The pudding is a mix between a velvety custard and a rice pudding, but with a little more to offer. The subtle fragrance of the orange blossom water is present, but not prominent. After just 15 minutes in the kitchen you can leave with piece of mind, knowing that dessert is already covered. It’s this dish that will leave your guests smiling, and remind you why you fell in love with food in the first place.

note: You can find orange blossom water at Whole Foods or any Middle Eastern market. 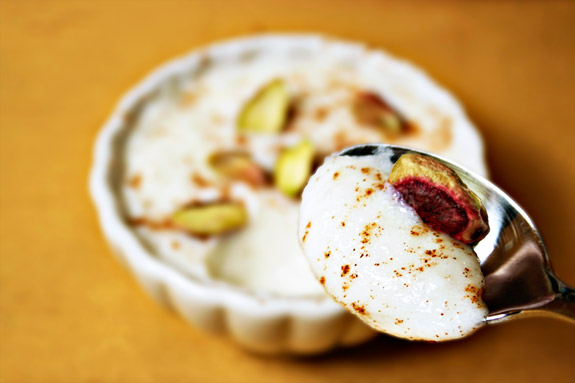 31 thoughts on “For the Love of Pudding”