I rediscovered Jim Lahey’s no-knead bread recipe a couple weeks ago. It was Wednesday evening and there it was, idly sitting in my RSS feed, waiting to be double-clicked: Faster No-Knead Bread. Mark Bittman had just blogged about a quicker variation of the original recipe he featured in the NYT in 2006. I never got around to making this bread when it first came out. Originally, I sided with the skeptical foodies who wanted no part in this trendy no-knead fad. For me, the foundation of bread was all in the traditional kneading techniques and no post in the NYT was going to change that. But, many successful minimalist recipes later, Mark had made a believer out of me. I took Mark’s recent post as a sign of divine culinary intervention and decided to give this no-knead method a try.

Before I could experiment with any quicker variations though, I thought it would only be right to try Jim’s original 24-hour, no-knead recipe, first. There was no mise en place, or anything of that nature. Like I said, it was a Wednesday evening, after work, and I was only surfing the web to procrastinate my inevitable visit to the gym (nothing unusual). I went down to the kitchen, mixed the flour, water, yeast and salt, covered it and went about my workout. 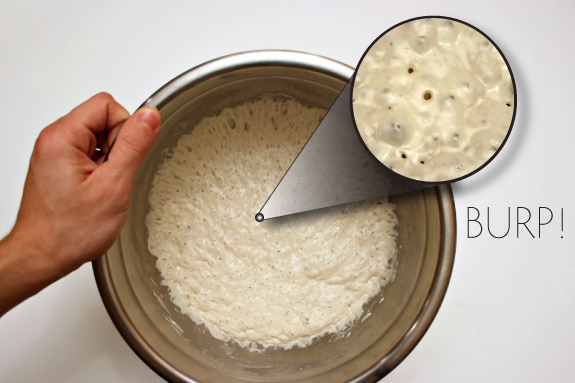 I couldn’t concentrate at work the following day. I was eager to see if time had done its job in creating the much desired gluten proteins that usually require 15+ minutes of intense kneading to develop. As soon as I got home and stepped foot in my kitchen I was greeted by the intoxicating aroma of yeast belch – it was glorious. After 18 hours I uncovered the well-rested dough and took a deep breath of the bakery scent that was being propagated from within.

The next step in the recipe was to invert the dough onto a floured surface and fold it onto itself. Then I placed it seam side down onto a cornmeal dusted cotton towel and allowed it to enter its final rising stage, just like in the video. This time, I was able to make it to the gym without any resistance – I knew that as soon as I got home, I would be less than an hour away from carbohydrate heaven! 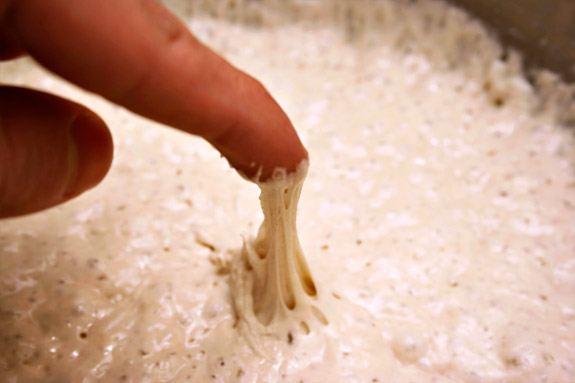 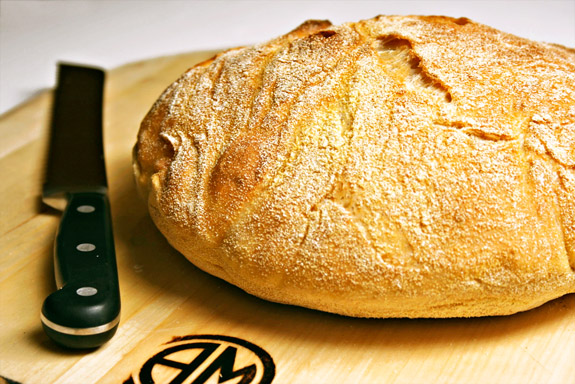 I pre-heated the oven as soon as I got home from the gym and immediately hopped into the shower so as to not disrupt the final rising stage. After 45 minutes of baking in a 550 degree oven, I was rewarded with my most successful loaf of homemade bread. 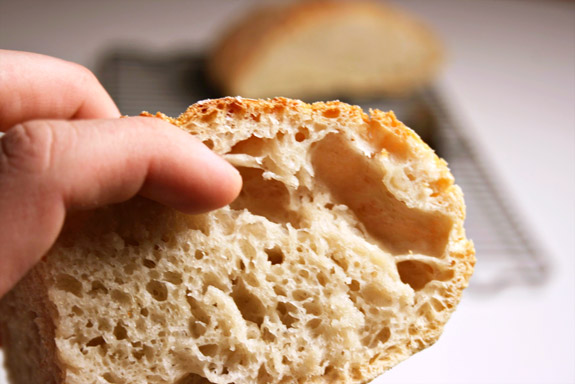 I was like a proud father. I embraced my inner bread geek and admired the crispy crust and delicate crumb structure of the bread. Apparently none of my friends know what I am talking about (ahem, ahem, Mike), but crumb structure refers to the different size pockets of air inside the bread; the more of those there are, the better. 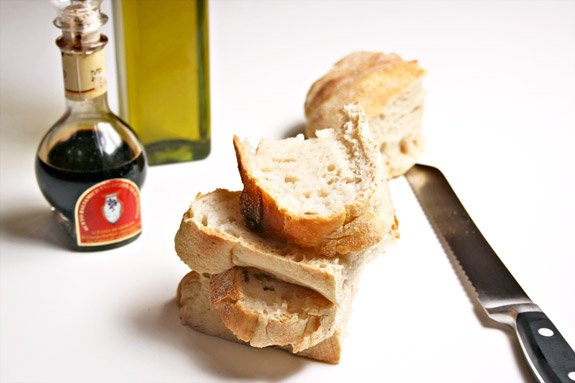 I couldn’t leave you guys without a mise en place photo though. In celebration of all things minimalist, I decided to enjoy the bread with some high quality extra virgin olive oil and traditional balsamic vinegar that I brought with me from Modena. 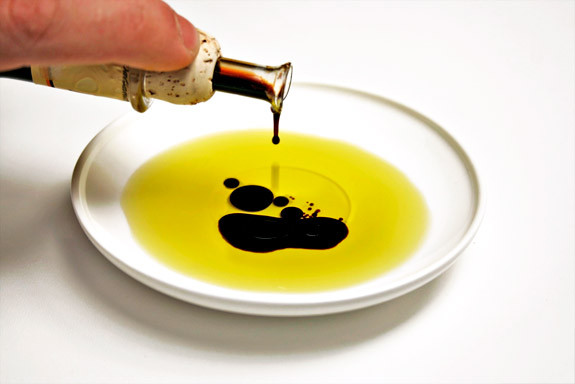 This is not the usual balsamic that you’ll find on the shelf of your local grocery store. At about 80 euros a pop, this stuff is as close as you can get to liquid gold. Traditional balsamic vinegar from Modena is only produced by a select number of families that have passed on the tradition from generation to generation. I got my bottle from L’Acetaia di Giorgio, where they invited me for an afternoon and showed me the entire process for making their vinegar. While I was there Giorgio showed me a batch that he started 22 years ago that he named Carlotta, after his daughter, which he will later use as her dowry – a tradition amongst most balsamic vinegar producing families. If you’re planing to go to Italy in the near future, I definitely recommend contacting Consorzio di Aceto Balsamico di Modena (CABM – the association for balsamic vinegar producing families) who can then put you in touch with one of their members for a private tour. 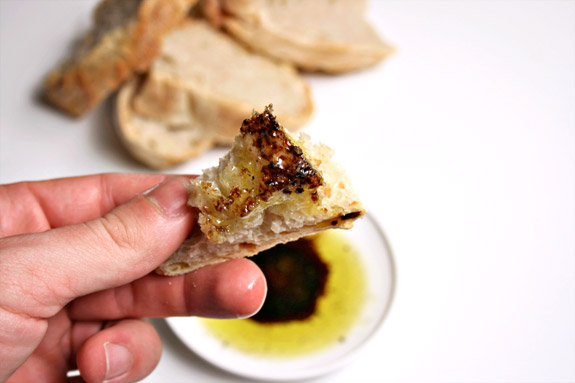 This is one of my favorite ways to enjoy bread right out of the oven. Hence the quote from my friend Jess who, “for fun”, calculated how many calories of bread I had eaten in a two-day window. I figure it’s all good because I work it all off at the gym… right? Have you guys tried any of the no-knead recipes? What have your experiences been with the bread? Send me links to your post if you’ve blogged about it, I’d love to read some of the variations!