This entry is dedicated to Dean Davidis, one of my favorite people to chat food with. Thank you for your endless inspiration and support; here’s to you – OPA!

My tzatziki recipe was born on accident after having strained yogurt too far while making a Middle Eastern spread called labne. I eventually tended to my forgotten disaster, but it was already too late – the once creamy yogurt had turned into a solid cheese-like mass. This is when the 1/16th Greek in me chimed in with the thought of turning my losses in for a spectacular tzatziki sauce.

Tzatziki is traditionally made with semi-strained yogurt (i.e. sour cream consistency) and salted, drained cucumbers. Well, what if I don’t drain the water from the cucumbers, what then?

Aside from receiving angry e-mails from Greek purists, the sauce turns out just fine. The moisture from the cucumbers perfectly compensates for the excess loss of moisture in the straining process. Personally, I even find the accident sauce tastier just because the cucumber liquid is more refreshing than the stuff that drains out of the yogurt.

You can execute the following recipe either way: traditional or not, just by adjusting how far you strain your yogurt. Regardless of the route, the final sauce is a tasty complement to almost anything your culinary mind can conjure. My favorites pairings for this sauce are kebabs, sandwiches and salads. 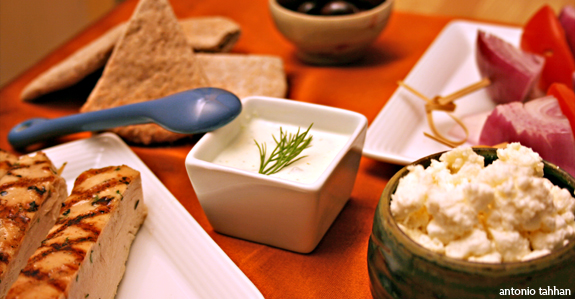 8 thoughts on “Tzatziki on Everything!”