There are no words to articulate how delicious, decadent, and versatile qashta is. Qashta, if you haven’t experienced it before, is Middle Eastern clotted cream. You typically see it used in Arabic desserts, but in Aleppo, they even have it for breakfast (because why not?). One of my favorite breakfasts in Aleppo was zlebiye (paper-thin fried dough) stuffed with qashta topped with cinnamon sugar and chopped Aleppan pistachios. This is not the kind of breakfast you have every day.

Side note about zlebiye: the zlebiye in Aleppo is very different than the zlebiye anywhere else in the Middle East. Most zlebiye are prepared by frying relatively thick pieces of dough, but in Aleppo, the zlebiye is paper-thin. So thin you can read through it. I never met anyone who makes this version at home, even in Aleppo. I used to buy my zlebiye from Halawiyat Diab, a popular sweet shop close to my apartment in Aleppo. After months of asking begging, one of the bakers shared the recipe with me. Unfortunately, it didn’t pan out. The dough never became stretchy enough to create that paper-thin pastry that makes Aleppo’s zlebiye so special. All I have to remember zlebiye by is my memory and this behind-the-scene video I shot at Halawiyat Diab in 2011:

In the video, you can see some zlebiye are “plain” (topped with cinnamon sugar and chopped Aleppan pistachios), but in the 1:05 minute mark, you’ll see the ones I was referring to, stuffed with qashta. My mouth waters every time. While I don’t have a successful recipe for zlebiye yet (I haven’t lost hope), qashta is an important component to many Middle Eastern desserts, which brings us to today’s post. This is a key recipe you’ll want to reference anytime a dessert calls for qashta. You can also use qashta to take desserts you already know and love to the next level: think waffles topped with qashta or qashta French toast! The good news is that qashta is incredibly easy to make and only requires four ingredients: whole milk, vinegar, cornstarch, and orange blossom water. 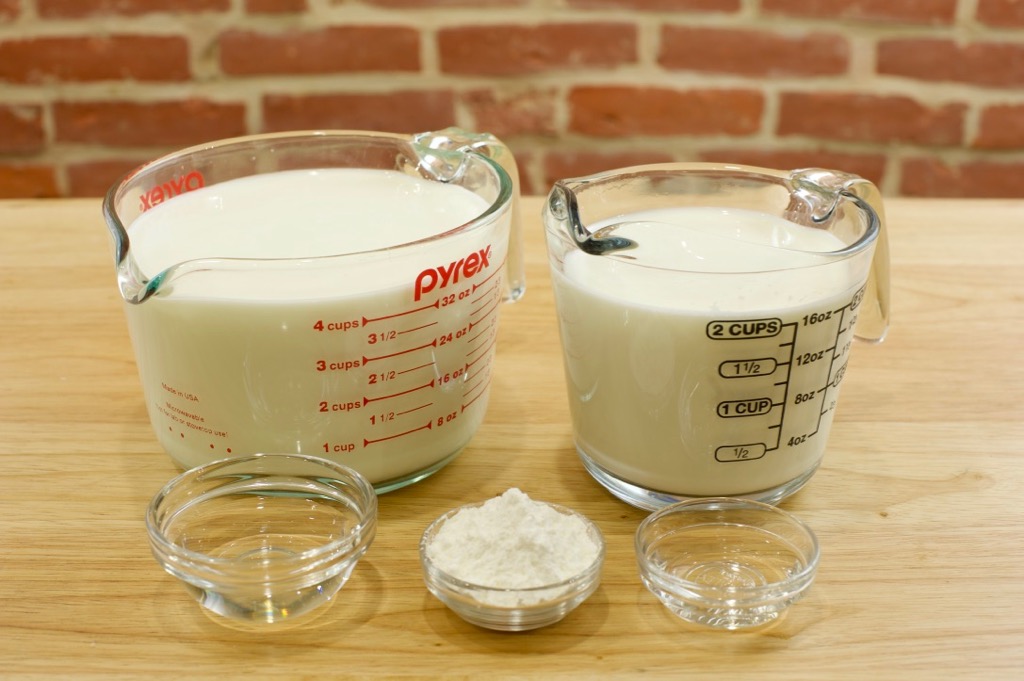 You’ll notice that qashta doesn’t have any sugar added. That’s because most Middle Eastern desserts, like baklava, use a simple syrup infused for sweetness. If you’re going to use qashta on a non-traditional dessert, I recommend either sweetening it with a little bit of sugar or topping it with honey, which is what I do later in this post. 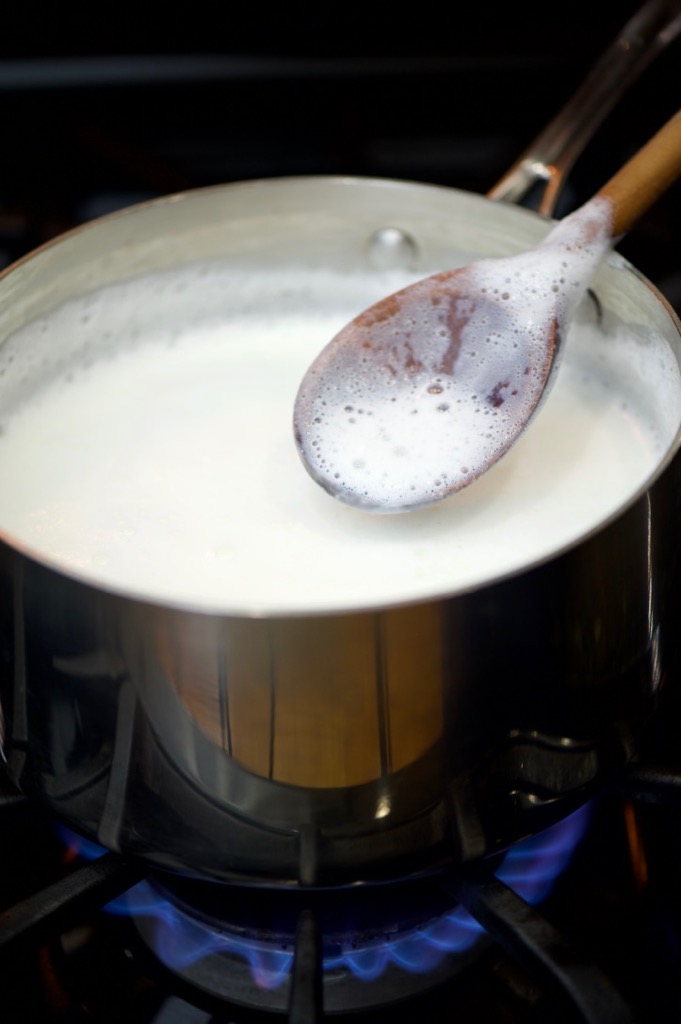 This recipe uses milk twice. The first one is for clotting. To clot milk, you’ll want to gently bring it to a simmer. 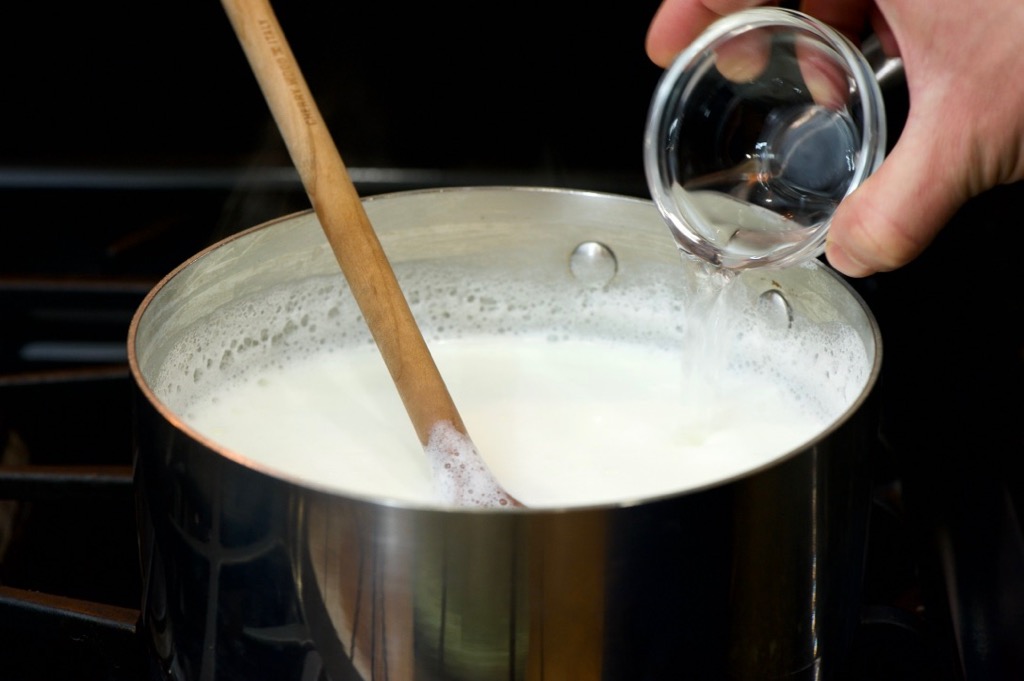 Once the milk is frothy and at a gentle simmer, you’ll want to stir in a little bit of white vinegar. The acid in the vinegar will clot the protein in the milk. Don’t worry, qashta is not sour or acidic. The purpose of the vinegar is to separate the curds from the whey. Some recipes online call for lemon juice, but the acidity level of lemons can vary, so I stick to simple white vinegar for a more consistent result. You can turn off the heat at this point and stir gently. 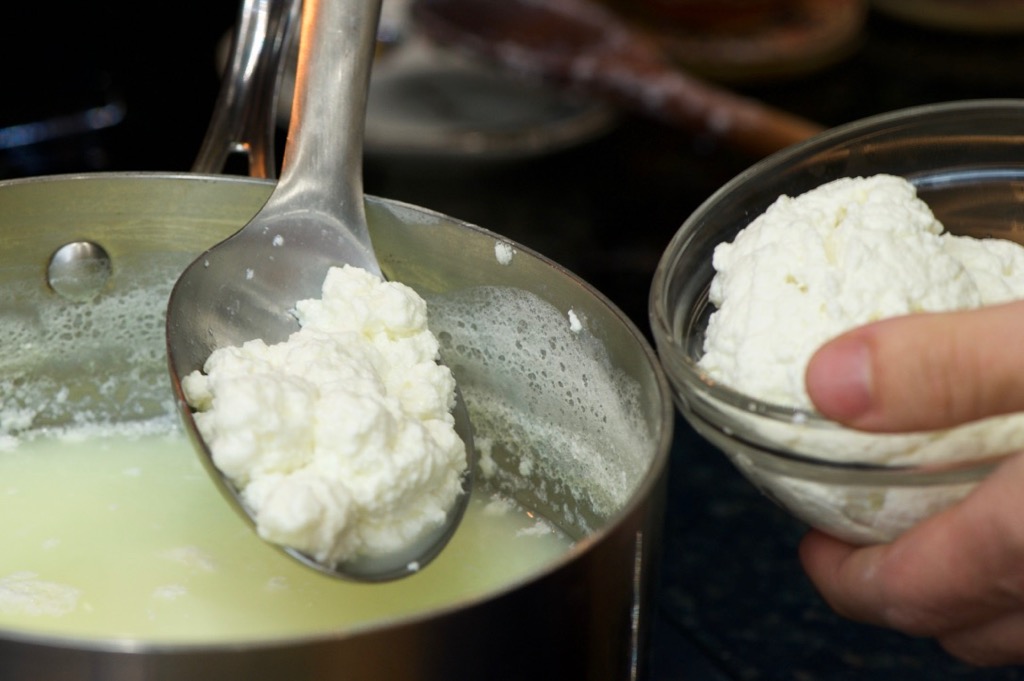 With a slotted spoon, you’ll want to gather the curds that have separated from the whey. The clotted curds will form the foundation for the qashta. 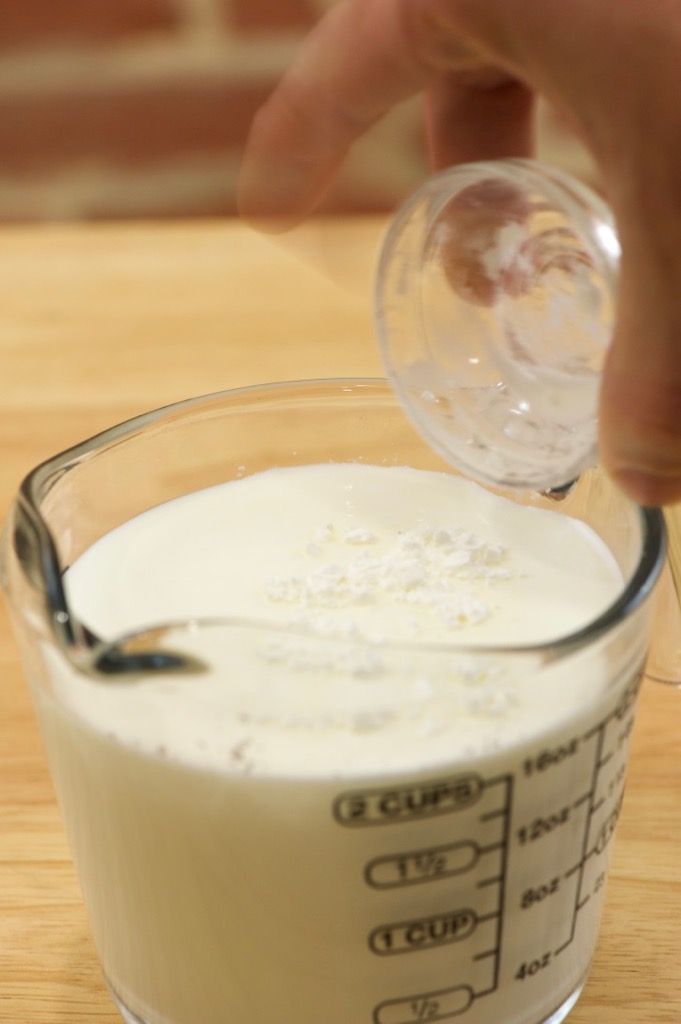 To make the curds creamy, we next need to prepare a rich base. The rich base is made up of whole milk thickened with cornstarch. Since cornstarch only dissolves in cold liquids, it’s important to dissolve the cornstarch in cold milk. Once the cornstarch is dissolved, transfer it to a sauce pan over medium heat. The milk base will be fully thickened once the milk begins to simmer. 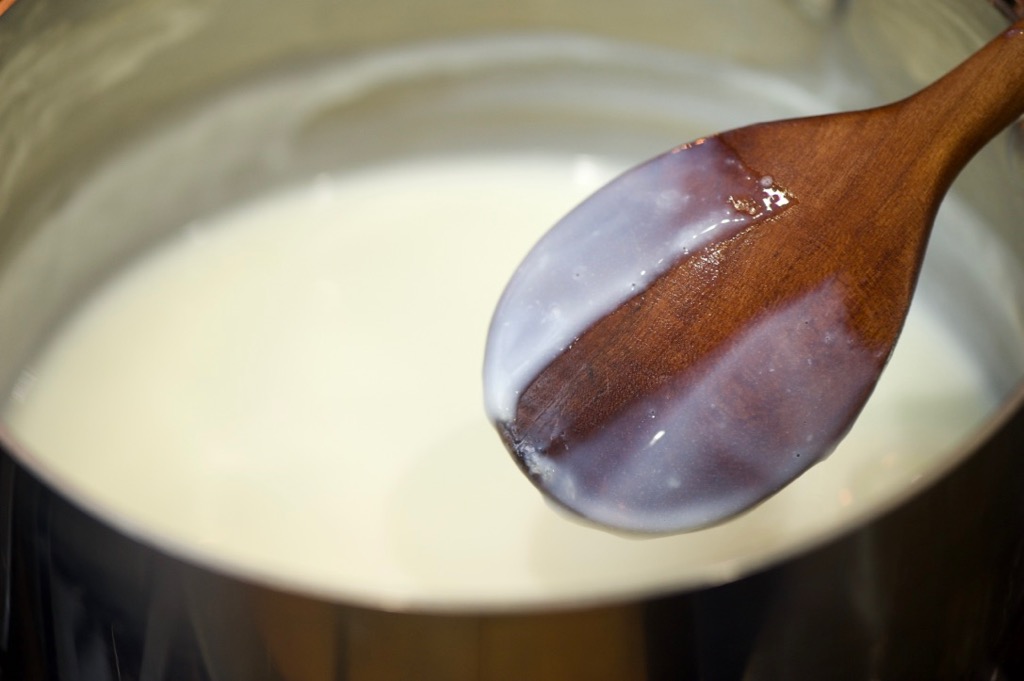 Once the milk comes to a simmer, test the thickness by running your finger along the backside of your wooden spoon. It should be thick enough to form a streak down the back of the spoon. 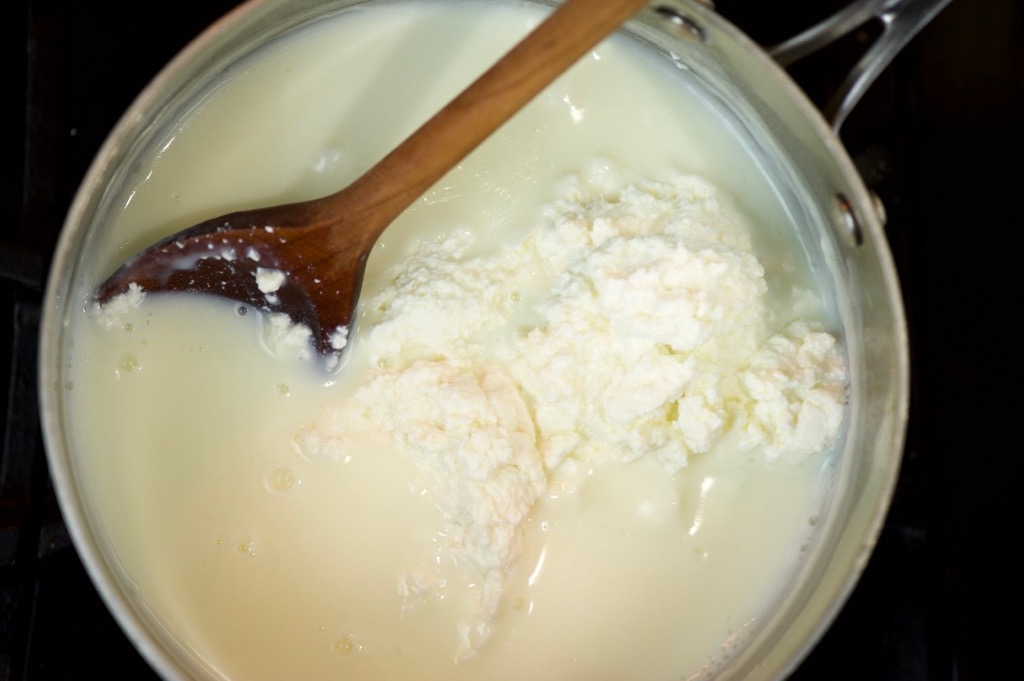 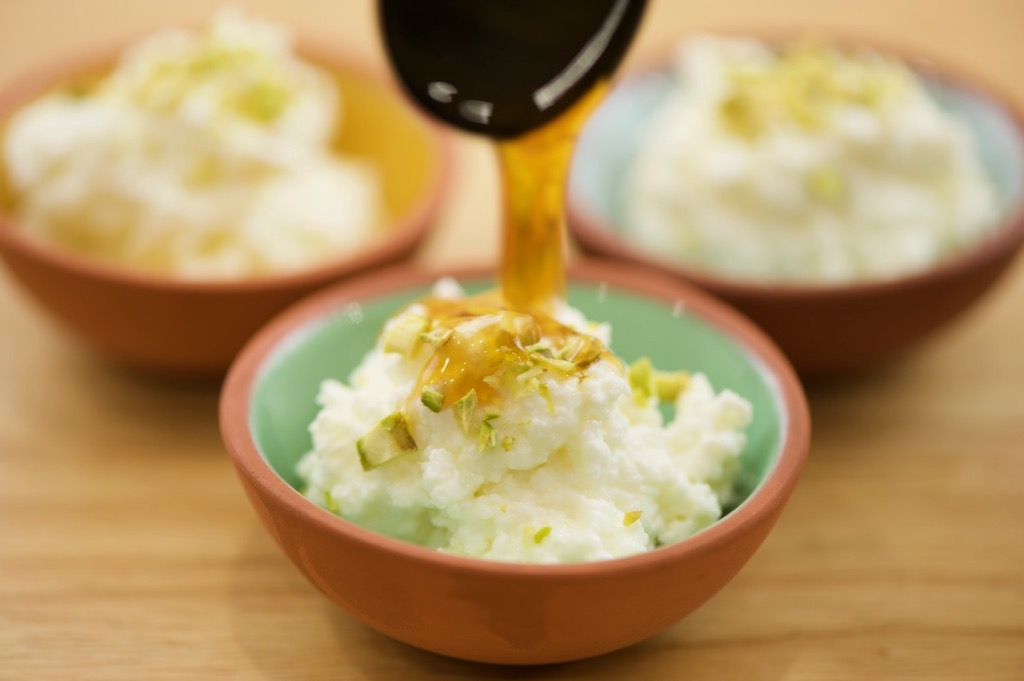 Note: Qashta or clotted cream is not generally sweetened because it gets incorporated into Arabic desserts that are already sweetened. If you plan on eating qashta as a snack or incorporating it into non-traditional desserts, I recommend sweetening it with a little sugar (while mixing the cornstarch with the milk) or topping the finished qashta with honey or simple syrup.

4 thoughts on “Qashta: decadence and versatility”